Heavy rainfall flooded areas all over Maryland, Washington, D.C. and northern Virginia Monday. While the flash floods and harrowing water rescues are now over, the pollution in our waterways remains.

According to Blue Water Baltimore, Baltimore City’s riverkeeper organization, 1.3 million gallons of sewage spilled into the Jones Falls, and in turn, the Inner Harbor on Monday morning.


” Heavy rainfall has caused water/sewer release through structured outfalls into the Jones Falls. These outfalls were designed 100 years ago to do just that. They will be eliminated in the next few years.”

But sewage isn’t all that made its way from the Jones Falls into the harbor, feeding into the Patapsco River and the Bay. A large sediment plume appeared around the Inner Harbor’s most popular attractions, stretching from the Maryland Science Center to the USS Constellation and the National Aquarium. 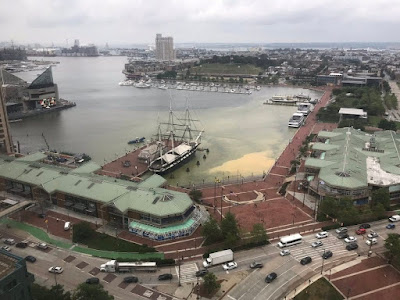 We did get a lot of rain, and this happens every time that happens so I'm not shocked, but it's long past time for Baltimore to clean up it's act. They've had a hundred years. Literally.
Posted by Fritz at 5:23 PM