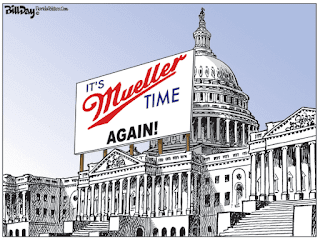 What I saw yesterday (I managed the morning hearings intact, but the dog walk brought me back to the afternoon hearing about half way through), was an old man, probably hard of hearing, a little slow on the comprehension of questions, and with little command of the report he had nominally written. It certainly added weight to the charge that he was not really the person in charge of the investigation, and he admitted that "day to day" running of the team fell largely on his aide-de-camp Aaron Zebley, he who had defended the Clinton aide who destroyed computers and cell phones. He relied heavily on the "not in my purview" dodge, using it to deflect any questions regarding the origin of the investigation from Republicans, and agreed generally with any Democrat who read portions of his testimony damning to Trump, but, I think pointedly, declined to read passages himself, to avoid giving them soundbites for their campaign ads. His only really animated moments were when he defended his team from charges of bias. He didn't ask if they were Democrats when they hired him. He already knew. He also refused to be drawn into an conclusions about obstruction of justice charges. Democrats tried particularly hard in the case of McGahn allegedly being told to fire Mueller, perhaps an attempt to bait him into life. 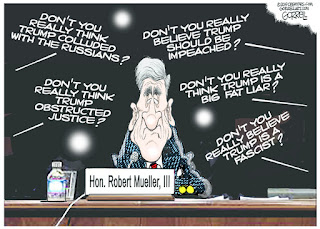 The reviews suggest Democrats got the lump of coal. Republicans may have got Slinkys.

Mueller Hearing a Democrat Debacle : The Other McCain

Ace of Spades HQ Mueller: "I'm not prepared to have a legal discussion"

Ace of Spades HQ Mueller Panel 2 Round 2; When Mueller Is Asked Directly If His Office Leaked the Timing of the FBI Black-Ops Raid on Roger Stone, Mueller Answers "I can't speak to that"

Ratcliffe to Mueller: Who said it was your job to declare non-exonerations? Update: Mueller "not familiar" with Fusion GPS?

Jordan to Mueller: Why wasn't Joseph Mifsud charged with obstruction?

Chris Wallace: Mueller Hearing Is 'a Disaster' for Democrats and Mueller

David Axelrod: Robert Mueller Not as “Sharp” as He Used to Be

Robert Mueller Says No Obstruction: He Was Not Hindered

Chris Wallace: Mueller Hearing Has Been A "Disaster" For Democrats, Reputation Of Robert Mueller | Video | RealClearPolitics

Turley on Mueller Testimony: 'The Most Newsy Thing That Came Out' Was That Rep. Lesko Can Get Cheap Cable | Breitbart

Robert Mueller: Democrats' Collusion with Russia 'Outside My Purview'

Robert Mueller: James Comey and I Were Friends

Matt Drudge on 'Dazed' Mueller: 'Drug Test Everyone in Washington!'

Mueller: Trump Could Be Charged with Obstruction of Justice After Leaving Office | Breitbart

Robert Mueller Was Not Interested in Serving as the Democrats’ Performing Monkey, and It Showed – Reason.com

Trey Gowdy: The person who learned the most about the Mueller report today was Bob Mueller | Fox News Video

POLITICO on Twitter: "This exchange between Rep. Steve Chabot and Robert Mueller raised eyebrows in our live chat. “If Mueller doesn't know who Fusion GPS is, this could be a long hearing,” said reporter @joshgerstein. Live analysis: https://t.co/7S5ElYTkj8… https://t.co/3AxiRNqjfQ"

‘A lack of urgency’: Democrats frustrated as House investigators struggle to unearth major revelations about Trump - The Washington Post

On Mueller’s final day on the national stage, a halting, faltering performance - The Washington Post

Democrats are now left with one option to end Trump’s presidency: The 2020 election - The Washington Post

CNN Throws In the Towel, Calls the Mueller Hearing for Trump

Mark Meadows on Twitter: "Wow from @RepArmstrongND. “When did you learn one of your top attorneys, Andrew Weissmann, attended Hillary Clinton’s 2016 election night party?” Mueller: “I’m not sure.” Armstrong: “Isn’t that a conflict of interest?” Mueller: “I’m not going to answer that.”"

Laurence Tribe on Twitter: "Much as I hate to say it, this morning’s hearing was a disaster. Far from breathing life into his damning report, the tired Robert Mueller sucked the life out of it. The effort to save democracy and the rule of law from this lawless president has been set back, not advanced."

Mueller “was not about finding the truth” | Catallaxy Files

As #MuellerHearings continue, Joe Scarborough seeks forgiveness ‘for ever being a Republican’ – twitchy.com

And there was even some Russiagate material not directly involved in the Mueller hearings:

Revealed: It Looks Like Former FBI Chief Had A Spy Within The Trump White House

Thread by @Avery1776: "1/What are the odds of this charity partnering with Link campus to create a think tank that chooses Mifsud as its first director? @BenKTallm […]" #KhashoggiKoolAid

Nicolle Wallace: A Reporter Might Be Jailed During Trump's Second Term

Here we go: Dems heard months ago that Mueller might not be "up to" testifying, says Politico
Posted by Fritz at 8:21 AM