Reason #6389 that Trump was Elected

Gov’t Dependency Plunges Under Trump — Why Aren’t We Celebrating?

Friday’s jobs report showed that the economy created 224,000 new jobs, yet the unemployment rate edged up to 3.7%.

Both are welcome news. The unemployment rate went up because 158,000 rejoined the labor market. These are people who previously didn’t have a job and weren’t looking for one.

The labor market is tight enough that people who’d given up on work are getting lured back into the job market. And they’re finding work.

As of June, there were 5.6 million more people with jobs than when President Trump took office — despite claims by prominent economists that the economy was already at full employment when he was sworn in.

The healthy labor market has resulted in something even more important yet little noticed: A sharp trend away from dependency on federal welfare and other benefits.

Take a look at the numbers:

Food Stamps. The Department of Agriculture reports that April enrollment in food stamps — which is officially called the Supplemental Nutrition Assistance Program — was down more than 308,000. So far this year, SNAP enrollment has declined by nearly 1.2 million. And since Trump took office, the number of people collecting food stamps has plunged by more than 6.7 million. Enrollment is now lower than it’s been since August 2009. 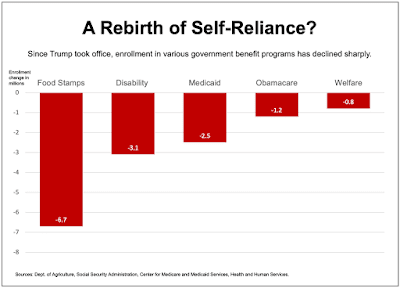 Disability. The number of workers on Social Security’s Disability Insurance program has sharply declined as well. It went from 88 million in January 2017 to 84.9 million as of May. That’s the lowest it’s been since August 2011. Some of that decline is because beneficiaries who turn 65 shift over to regular Social Security. But the data also show that new disability applications are down. Average monthly applications for SSDI this year is 9% below where it was in 2016, government data show.

Medicaid. Enrollment in Medicaid also has dropped sharply since Trump took office — despite the fact that Virginia decided to expand its program under Obamacare, which added some 300,000 to its Medicaid rolls over those years. As of this March, the total number of people on Medicaid and CHIP — the health insurance program for children — was down by 2.5 million.

Obamacare. The number enrolled in Obamacare has declined every year since Trump took office as well, and is now 1 million below where it was at the end of 2016.

Welfare. The number of those collecting welfare — either on the federal Temporary Assistance for Needy Families or what are called “separate state programs” — has dropped by more than 800,000 under Trump.

This is all good news, and most of it is in sharp contrast to the previous administration. Food stamp enrollment was 13 million higher when Obama left office than when he came in. There were 1.4 million more workers on disability. Medicaid enrollment exploded thanks to Obamacare. The number on welfare was only slightly lower by the end of Obama’s two terms in office, despite the fact that the recession ended six months after he was sworn in.

In a less biased news media world, the decline in government dependency would be front-page news.

To the liberals in the news, less people dependent on the government and less likely to vote for Democrats. No reason to celebrate that!
Posted by Fritz at 8:33 PM