And Speaking of Mud 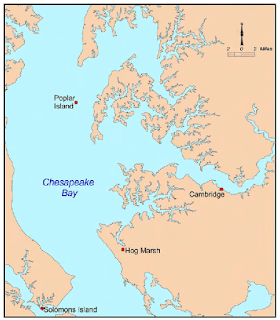 Poplar Island, located within the Maryland portion of the Chesapeake Bay, is the scene of a landmark project that will create more than 1,100 acres of tidal wetlands and wildlife habitat using clean material dredged from the Port of Baltimore’s Bay shipping channels.

In 1847, the island provided approximately 1,000 acres of wildlife habitat, but years of steady erosion along with sea level rise reduced it to four islets totaling less than five acres.

The initial dike construction project was completed in 2002, and construction to expand the project even further to more than 1,700 acres began in 2016. 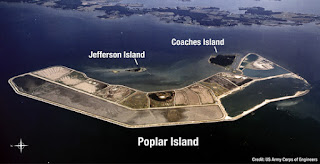 As Moffatt & Nichol has just announced, the expansion is now more than 75 percent completed.

The final project will include approximately 776 acres of tidal wetlands, including low marsh and high marsh habitat, bird nesting islands, and open water ponds, a 110-acre open water embayment, and an upland with trees and shrubs of approximately 829 acres.

Poplar Island is basically a waste disposal project dressed up as wildlife remediation. Baltimore Harbor needs continuous dredging to allow deep draft ships to dock, and it's got to go somewhere. After the Poplar Island project is complete, another site will be needed. There are plans in the making for choosing either James Island (the island disappearing across from us) or Barren Island, an island with some remediation going on already to the south of us and across. I don't know the status of that decision, but it's time to start thinking about it seriously. History, such as the Conowingo Dam "crisis" suggests you can't start the process too early.