At WUWT, Kip Hansen does a superlative job of debunking a favorite meme of the left, that sea level rise is going to swallow America's naval bases, justifying their draconian proposals ameliorating  climate change in this case citing a recent NYT article that targets Norfolk, VA: Is Historic Newport, RI Threatened by Sea Level Rise?


The New York Times has treated its readers to an in-depth piece in the Science section with the provocative title: ‘We Cannot Save Everything’: A Historic Neighborhood Confronts Rising Seas. In the article, by author Cornelia Dean, the claim is made that:


“Climate change is forcing experts to reimagine the future of historic preservation here.”
“Rising seas have left preservationists wondering how, or even whether, to save some Colonial-era homes here”.
“The Point, [ in Newport, R.I.] a waterfront neighborhood here, is one of the largest, best preserved and most important Colonial-era communities in the United States. Its grid of 18th-century streets contains scores of houses built before the American Revolution, and dozens more that are almost as old.”
“Today, the neighborhood faces a new threat. The Point sits only a few feet above sea level, and because of climate change, the ocean is rising. So people have been thinking again about how to preserve the neighborhood.”

Yes, the neighborhood called The Point is at risk from normal everyday, centuries-long absolute sea level rise which accounts for much of the relative sea level rise at Newport exacerbated by the subsidence of the low-lying neighborhood as the now centuries-old fill continues to settle and to wash out from under it with each tide cycle as it has from the moment the fill was dumped into the harbor to create the land the neighborhood was built on.

No, the problems at The Point are not caused by Climate Change, unless one is referring to the change of the climate from the Little Ice Age (16th to the 19th centuries) to the Modern Warm Period.

For those still interested, it is a useful mental exercise to go through the steps necessary to arrive at the above conclusions.

What follows is a pretty thorough review of what we know about global sea level rise (about 2 mm/yr), with no evidence yet for any increase in the rate due to global warming.


Note that NOAA makes two different statements about sea level rise: one based on long-term historic data (as above) — “absolute global sea level rise is believed to be 1.7 +/- 0.3 millimeters/year during the 20th century” and produces another, the graph here, of satellite measured SLR, which they state is “2.9 ± 0.4mm/year” in the satellite era. There has, as yet, been no real definitive reconciliation between the two figures in the literature. The long-term difference between the two, over a century, would be about 4 inches. The satellite’s additional four inches do not appear at GPS-corrected tide gauges around the world. The most cited reference for this is Church and White (2011) [ .pdf here ].

He then gets down to the Norfolk area: 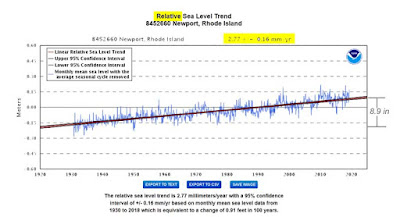 In the last 100 years, relative sea level, at the tide gauge, has risen about 9 inches (we’ll give it the standard 8-12 if you wish). NOAA’s note at the bottom of the image gives 9.1 inches. Remember that the tide gauge has been changed (and probably moved) several times since 1930, and it currently looks like this: 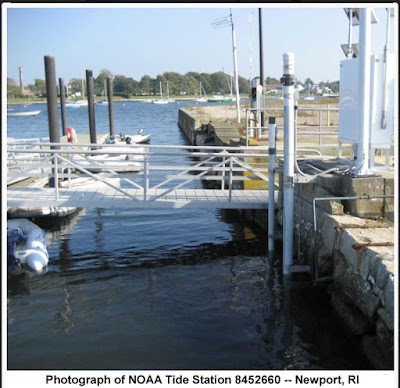 It looks to me like they have 9 inches to spare for the next century. And concrete isn't that expensive...

The price of waterside housing is that occasionally, you have to move.
Posted by Fritz at 7:14 PM