A short list today, thank goodness. From Chuck Ross at Da Caller, Report: FBI Discussions About Carter Page Wiretap Were Stalled, And Then The Steele Dossier Came Along

The FBI’s core team of Russia investigators reportedly began discussing a wiretap of Trump campaign adviser Carter Page in August 2016, earlier than previously known, but were stalled amid bureaucratic handwringing until the infamous Steele dossier made its way to the bureau more than a month later.

That timeline of events, reported by The New York Times, indicates the dossier played an essential role in the FBI’s efforts to conduct surveillance of Page, as Republicans have said.

And the sooner IG Horowitz and US Attorney "Bull" Durham get to the bottom of it, the better.

A pair of articles on the progress of the Gen. Michael Flynn sentencing saga from Sundance at CTH. First, DOJ Rolls Up Mike Flynn Jr as Witness in Case Against Flynn Partner Bijan Rafiekian…


Given what we know about how the DOJ pressured Michael Flynn Sr. to take the plea deal based on threats against his son Flynn Jr; and against the backdrop of the DOJ losing with Judge Anthony Trenga in EDVA; the DOJ now appears to be re-leveraging the original plea to compel cooperation from Jr.

This explains why the DOJ said yesterday they would await the DC sentencing (against Flynn Sr.) pending the outcome of the EDVA case against Bijan Rafiekian.

The DOJ in DC said they anticipated Flynn Sr might be a witness for Rafiekian’s defense; so they’ve moved to put Flynn Jr. in opposition to any potentially supportive testimony from Flynn Sr. in EDVA by revisiting (re-leveraging) the threat against Flynn Jr.

If Flynn Jr. didn’t agree to testify in the Rafiekian case, the DOJ would likely have cancelled his father’s plea agreement in DC and re-initiated cases -with new charges- against both Flynns’.

This also explains why corrupt U.S. Attorney Jessie Liu added new lawyers in the DC case.  Sneaky bastards.   In essence, Jessie Liu is anticipating a change in plea from Flynn, per new Flynn lawyer Sidney Powell, and proactively positioning the DC case to reignite against both the father and the son if: (a) the Rafiekian case goes sideways; or, (b) Flynn Sr. changes his plea agreement.

and Flynn Prosecutors Will “Reassess” Sentencing After Partner Trial Concludes…


Some updates in the Michael Flynn case.  As requested the DOJ has filed a response to Judge Sullivan’s order. The DC judge wanted to know what the status of the prosecution position was now that Michael Flynn is no longer a cooperating witness for the DOJ in the EDVA case, against his former business partner.

The prosecution responds:
. . .
Strange position considering the backstory. The government wants to delay sentencing until after a case where Flynn is no longer involved is completed?

I hope AG Barr is following the case closely. The conduct of the prosecutors is suspicious at best. 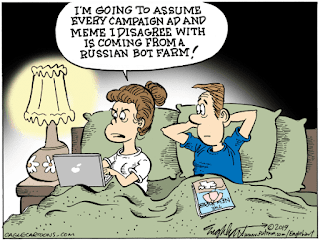 
Unfortunately, many on the right swallowed the Russians' lie hook, line, and sinker. Doubling down, even as the authorities insisted that it wasn't true, many conservative commentators stubbornly promoted the fake news that the DNC was covering up information in order to protect Hillary Clinton. The story's continued spread served to create further pain and trauma for Seth Rich's grieving family. It also served to create further rancor between the left and the right in this country.

But Wolf Howling at Bookworm spurns the baited hook: The DNC Server, the Russian Hoax, & the Murder of Seth Rich


The central part of the Russian narrative is the claim that Russian agents hacked the DNC server. Amazingly, inexplicably and criminally, we do not, to this day, know if that is true because the FBI has never examined the server. An entity employed by the DNC, Crowdstrike, asserted that the emails were hacked in a phishing scheme. Both Comey and Mueller assumed that to be true without any verification.

Further, the answer to whether the DNC was phished could definitively answer an open question about the murder of DNC employee Seth Rich. If the DNC server was phished, than Julian Assange’s charge that Rich, not Russia, was the source of the DNC emails and that he may have been killed because of it, can be definitively disproven. But that is a charge that the entire progressive left claims is verboten to even ask. The FBI decided not to involve itself in the investigation of Rich’s murder — inexplicable given the potential relationship to the DNC server hack — and Mueller chose not to interview Julian Assange.
. . .
The meat of the claim of Russian interference in the 2016 election came in July, 2016, when Hillary Clinton’s campaign manager announced in an interview with Jake Tapper that the DNC server had been hacked, that the Russians had done it, and that they had done so in order to help elect Trump. None of the DNC emails were a smoking gun that caused the Clinton campaign anything more than minor embarrassment..

Mook’s claim that the DNC server had been hacked by Russia was based on a preliminary analysis conducted by a firm employed by Perkins Coie, Crowdstrike, on behalf of the DNC. Crowdstrike sent a draft preliminary analysis with redactions to the FBI. The FBI, under Director James Comey, never inspected the server or independently verified the hack. Likewise, Robert Mueller, in his independent investigation, never took control of the server to verify the hack.

On Sept. 23, 2016, Michael Isikoff became the first journalist to unleash the DNC’s October surprise. In his article for Yahoo News, U.S. intel officials probe ties between Trump adviser and Kremlin, Isikoff claimed the FBI was investigating Carter Page who was supposedly interceding with “Moscow” to influence the election.
. . .
First, understand Isikoff’s role in the Russian hoax. In the run up to the 2016 election, Fusion GPS’s Glen Simpson and Christopher Steele briefed every major news entity on the contents of the Steele Dossier in the hopes of making Steele’s allegations public and dooming Trump. It was the mother of all October surprises. Yet in a pool of hyper partisan Trumpophobes that included CNN, the New York Times and the Washington Post, it was only Isikoff (and later rabid proggie David Corn) who published the ridiculous and unsubstantiated allegations in advance of the 2016 election as if they were serious allegations under investigation by the FBI. Isikoff either lacks any journalistic ethics or he is naïve to the point of gross incompetence. Either way, nothing he writes on anything touching the Russia hoax can be taken at face value as reasonably likely to be true.

When they really are out to get you, it's not paranoia.
Posted by Fritz at 9:05 AM