You Mean, Besides Providing Nearly All the Food and Water, Raw Materials and Energy?

And Provide a disproportionate number of the soldiers and most of the land for military bases? Stacy McCain is Saying ‘Thank You’ to David Atkins 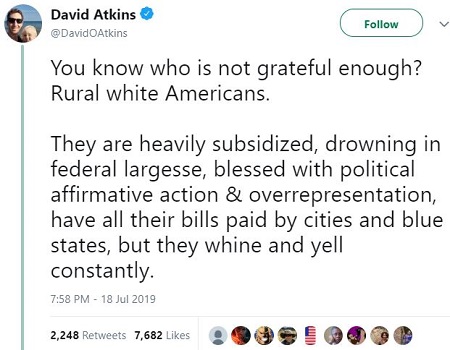 Everybody had a good point-and-laugh at David Atkins’s expense, without wondering: Why would a California Democrat be so filled with loathing of “rural white evangelicals”? Was he bullied by militant Baptists as a child? Has he ever actually met any of the rural white people he says are thoroughly despised by “the vast majority of Americans”? No, he’s just a liberal who can look at the map and read the exit polls the same as you or I can, and who therefore understands which demographic category most strongly supports the Republican Party. He hates white people and Christians and rural America because they are an obstacle to the Democrats’ project of turning America into a totalitarian one-party regime where dissent from the approved opinions is forbidden.

Of course, Atkins himself is white, but he lives in Santa Barbara, an affluent seaside enclave of privilege where the media home value is over $900,000 and only 1.4% of the population is black. It’s very easy for people who live in such circumstances to imagine that they are morally superior to everyone who lives in, say, Lowndes County, Georgia, where 37% of the population is black and the median home value is $129,700.

Hillary Clinton got 61% of the vote in Santa Barbara County, whereas Donald Trump carried Lowndes County with 57.5% of the vote.


Kern County comprises the Bakersfield, California, Metropolitan statistical area. The county spans the southern end of the Central Valley. Covering 8,161.42 square miles (21,138.0 km2), it ranges west to the southern slope of the Coast Ranges, and east beyond the southern slope of the eastern Sierra Nevada into the Mojave Desert, at the city of Ridgecrest. Its northernmost city is Delano, and its southern reach expands just beyond Lebec to Grapevine, and the northern extremity of the parallel Antelope Valley.

The county's economy is heavily linked to agriculture and to petroleum extraction. There is also a strong aviation, space, and military presence, such as Edwards Air Force Base, the China Lake Naval Air Weapons Station, and the Mojave Air and Space Port.

But I doubt the David Atkins ever sets foot in Kern County, unless to drive through, which, frankly is about the best I've ever done either, driven I-5 between LA and NorCal or Oregon more times than I can remember.

I wonder what David Atkins has ever done for Kern County?