On the peak day of our heat wave: Hot Air, has a subscription to the NYT so you don't have to: Mueller Hearings On Wednesday Present Make-Or-Break Moment For Democrats

“One way or the other, the Mueller hearing will be a turning point with respect to the effort to hold Donald Trump accountable for his reckless, degenerate, aberrant and possibly criminal behavior,” said Representative Hakeem Jeffries of New York, the House Democratic Caucus chairman and a member of the Judiciary Committee. “After the hearing, we will be able to have a better understanding of the pathway forward concerning our oversight responsibilities and the constitutional tools that are available to us.”

Partisans in both parties may already have made up their minds, but Democrats are counting on Mr. Mueller’s testimony to focus the broader public’s attention on the findings of his 22-month investigation — either to jumpstart a stalled impeachment push or electrify the campaign to make Mr. Trump a one-term president.

Even Speaker Nancy Pelosi, who has been a voice of caution on impeachment for much of the year, has tied the testimony to Democrats’ broader political prospects.

“This coming election, it is really an election that the fate of this country is riding on,” she told House Democrats at a private meeting recently, according to an aide who was there. “This presidency is an existential threat to our democracy and our country as we know it.” 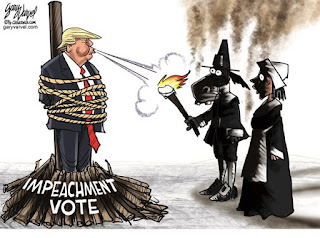 and  Republicans Prep For Mueller Showdown And Counsel A Light Touch


“The obvious first question will be, ‘When did you know there was no coordination and no conspiracy?’” said Representative Jim Jordan of Ohio, one of the Republicans’ most recognizable attack dogs. He now sees Mr. Mueller as the ideal mouthpiece to deliver the conclusion that the investigation found insufficient evidence to charge anyone with conspiring with Russia to influence the 2016 election.

Not every Republican is on board with a gentler approach. Representative Louie Gohmert of Texas rejected any suggestion he might pull his punches. “I can’t wait,” he said. Representative Matt Gaetz, a firebrand from Florida, pledged a pointed discussion of bias, which he has long maintained corrupted the investigation.

His goal for the hearing? “We are going to re-elect the president,” he said.

It's the NYT, so treat it with the same skepticism you would for WND.

At Lawfare (which is a website in addition to a method), lyin' Jim Comey offers What I Would Ask Robert Mueller. You might not be shocked that they are not favorable to the president
Posted by Fritz at 8:39 AM