The Wild Black Cherry, aka Wild Cherry or Rum Cherry 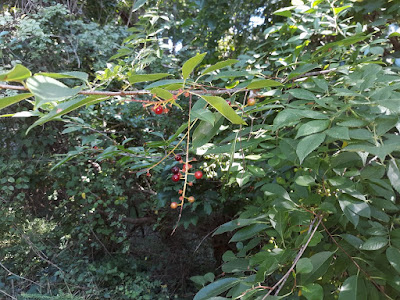 Ranging from southeastern Canada through the eastern United States west to eastern Texas, with disjunct populations in central Texas and mountains of the southwestern United States, Mexico, and Guatemala, Black cherry is a 25-110 ft. deciduous tree, distinctly conical in youth. When open-grown it becomes oval-headed with spreading, pendulous limbs and arching branches. Crowded trees grow tall and slender. Southwestern varieties are often shrubby. Leaves shiny on the upper surface; blade oblong with a long pointed tip and tapering base, margins finely serrate. White flowers are held in drooping racemes after the glossy leaves have emerged. The dark red fruit changes to black from August through October. Aromatic tree; crushed foliage and bark have distinctive cherry-like odor and bitter taste, owing to the same cyanide-forming toxic compounds, such as amygdalin, found in the wood and leaves of some other woody members of the Rosaceae. Fall foliage is yellow.

This widespread species is the largest and most important native cherry. The valuable wood is used particularly for furniture, paneling, professional and scientific instruments, handles, and toys. Wild cherry syrup, a cough medicine, is obtained from the bark, and jelly and wine are prepared from the fruit. While the fruit is edible and used in beverages and cooking, the rest of the plant contains amygdalin and can be toxic if consumed. One of the first New World trees introduced into English gardens, it was recorded as early as 1629 in Europe and is now highly invasive there and in northern South America. Five geographical varieties are currently distinguished: P. serotinavar. serotina (Eastern black cherry) in eastern North America as far west as east Texas, P. serotina var. eximia (Escarpment black cherry) in central Texas, and varieties virens (Southwestern black cherry) and rufula (Chisos black cherry) in mountains of southwestern North America. Populations inhabiting the interior mountains of Mexico and Guatemala are assigned to the subspecies P. serotina ssp. capuli(Capulin black cherry) but are sometimes classed as variety salicifolia.

I took that picture this morning as I was walking Skye around the neighborhood early, in a partially successful effort to beat the heat (it wasn't yet 90 when we got home). Wild Cherries are very common in our woods, and because the birds love their cherries, the seed get everywhere, and come up in the gardens where it takes a bit of work to eliminate them. I've never seen a big one out in the open; most of ours are lanky and tall from straining to beat out the oaks, hickories and poplars.

You rarely see the fruit; for the most part it's way up in the canopy, and the birds tend to get it as soon as it's ripe. I did try the darkest one on that little cluster. It was semi-sweet, distinctly cherry tasting, and just a touch bitter. Most of the fruit is the stone; the flesh around it is fairly thin.
Posted by Fritz at 2:16 PM