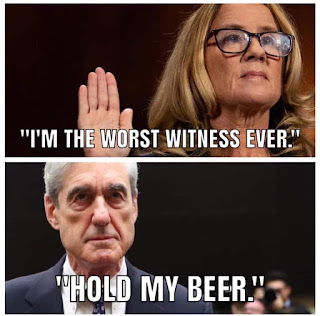 No rest for the wicked, eh? Opening with the Wombat's In The Mailbox: 07.25.19 for a few links, American Greatness: The “Marlene Effect” – Why Our Reasonable Neighbors Are Blind To The Deep State, American Thinker: Time To Wheel Robert Mueller Away, Da Tech Guy: Is The U.S. Turning Into A Surveillance State? also, #MuellerMadness, or, The Revenge Of The Russian BotsDon Surber: Media Reacts To Muellergeddon, Legal Insurrection: The Investigators Need To Be Investigated and the usually sensible Megan McArdle: Give Up Hoping For A Deus Ex Machina End To President Trump 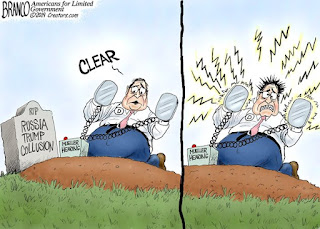 The Washington Post (30 day pass nearing expiration) is emitting primal screams of pain, Democrats struggle to figure out next move against Trump after Mueller hearing falls flat, Michael Gerson, Mueller wasn’t our savior. We are. Eugene Robinson, Trump’s wrecking ball keeps swinging, Jennifer Rubin, Mueller didn’t fail. The country did. Damn you deplorables! Jada Yuan, During the Mueller hearing, the hallway was really the place to be, because being inside was a nightmare! Danielle Allen, We are in our Articles of Confederation moment, with only Hugh Hewitt showing any pleasure, The tide has turned, and Trump has the advantage


But with the conclusion of former special counsel Robert S. Mueller III’s testimony on Wednesday, Trump has decisively repulsed the attempt to deny him the opportunity to win that vindication at the polls in November 2020. Indeed, the president is now obviously, and with a high probability of success, going on the offensive.

Power Line reports on the Descent to the Mueller miasma with a supercut of Mueller's "best" moments:

Rep. @tedlieu responds to Robert Mueller's clarification regarding guidance against indicting a President: “I don't know who got to him, I don’t know who talked to him, but that was very odd.” https://t.co/hKfyEFb7BC pic.twitter.com/kasLWHrjVu
— CNN (@CNN) July 25, 2019


Ace, DARK MYSTERIES OF POWER: To Explain Mueller's Poor Performance, Democrats and CNN (But I Repeat Myself) Turn to, Get This, A Conspiracy Theory That "Someone Got To Him"


When all you have is a hammer, craft a conspiracy theory explaining the non-existence of screwdrivers. 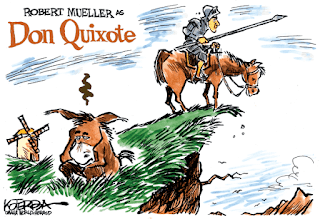 At the Boston Herald,  Mueller collapse raises more questions, but notes that John Durham may tie up loose ends. We can only hope.


The fallout from Wednesday’s disastrous performance by Robert Mueller in the Capitol includes a nearly 450-page report now in question. We don’t know who wrote it. We don’t know who really ran the investigation. We do know that several investigators on Mueller’s team were rabidly anti-Trump and pro-Hillary Clinton.

In fact, the Justice Department’s voluminous Inspector General report featured the political musings of the investigators. The Office of Inspector General, “Discovered text messages and instant messages between some FBI employees on the investigative team, conducted using FBI mobile devices and computers, that expressed statements of hostility toward then candidate Donald Trump and statements of support for then candidate Clinton.”

Members of the team attended Clinton events, donated to her campaign and even legally represented some of her associates.

Mueller himself bragged about his disinterest concerning such matters at the hearing Wednesday. “We strove to hire those individuals that could do the job,” he declared. “I’ve been in this business for almost twenty-five years and in those twenty-five years I have not had occasion once to ask somebody about their political affiliation. It is not done. What I care about is the capability of the individual to do the job and do the job quickly and seriously and with integrity.”

Pardon us if our faith in Mueller’s ability to read a person’s heart is diminished after witnessing his frail and inept appearances in front of those congressional committees this week.

At the upper levels of the pyramid, Washington D.C. is a pretty small place, and the major players know each other well personally and by reputation. He knew who they were before they hired him. 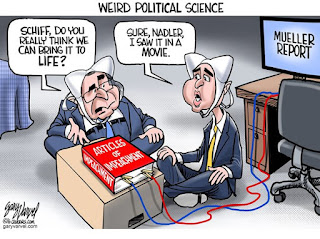 Capt Ed,  Gaetz: We Knew About Mueller’s “Frailty” — And Strategized For It


A day after Mr. Mueller’s appearance before Congress, described by some as “befuddled” and by others as a “disaster” for Democrats, the Florida Republican said the 74-year-old prosecutor’s health was a hot topic in prep sessions.

“There were some House Republicans in our prep sessions patting themselves on the back about that and feeling optimistic about assertions he might not be all there,” Mr. Gaetz told The Washington Times.

He said he didn’t believe those colleagues and warned them to expect a razor-sharp witness, but “it turned out the rumors we’ve been hearing about his condition seemed accurate.” 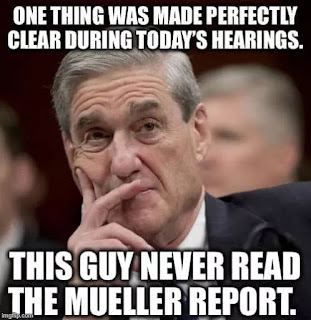 Newt Gingrich at the Week, Who Wrote the Mueller Report? Because I Don't Think It Was Robert Mueller. I never expected him to write much of the actual text, but it's become apparent he didn't even read much of it as it was being crafted.


When he said he never asked his team their political views, I believe him.

It also signals that the most charitable conclusion you could reach was that Mueller had come of age in an era of professional responsibility and did not realize he now lived in an era of harsh, even vicious, partisanship.

My first reaction to his assertion that he did not ask the political opinions of his staff was that it was laughable that he could randomly assemble a group of hard-line, anti-Trump prosecutors without a single pro-Trump Republican lawyer in the room.

However, the more I watched him, the more I came to the conclusion that he must have been a figurehead. The tough, younger Trump-hating Democrats must have networked with one another and assembled a legal team dedicated to destroying President Donald Trump and protecting the Clintons.

Seen from this perspective, it is a tribute to Trump that despite their best efforts these deeply hostile prosecutors could not find evidence of serious wrongdoing. They could write innuendo—and huff and puff—but in the end the Trump wall of obeying the law withstood the best these smart, tough, widely experienced prosecutors could do. 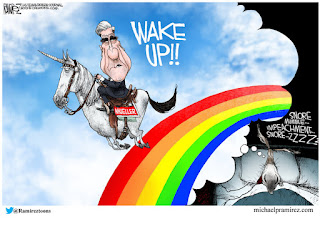 Mary Chastain at LI, Mueller: Russians Also Tried to Help Hillary a widely overlooked point in the hearing, but I would say more correctly that the Russians wanted to cast doubt on our whole political system, and with the Democrats' help, have done impressive work.

Tony Shaffer at Da Caller, Mueller’s Testimony Is Over; Now It’s Time For James Comey To Answer Some Questions. Long past time, actually.


James Comey has as much credibility as a frog has feathers. His efforts to frame the president are laughable. With two active DOJ investigations that both involve decisions made by Comey during his tenure as the director of the FBI, he may soon have to answer a set of questions not of his own making, and he won’t likely be laughing then. 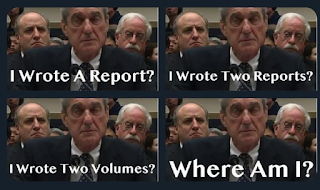 From Capt. Ed (a busy man), After Mueller Flop, A Nadler-Pelosi Fight? and at the Peacock Pelosi: I'm not slow-walking impeachment inquiry. Nadler: It's 'in effect' anyway.

Ace has some meta-news, Director of National Intelligence Coates Out? Docs Declassified? News on the FISA Abuse Investigation Coming?


Now, about the Durham news:

He might be talking about this: that Durham has reached out to Misfud and his attorney for an interview, and that Misfud's lawyer has told Solomon that his client is prepared to admit that he was in fact acting as an agent of the FBI in setting up Papadopolous by offering him the silly bait of saying "The Russians might have Hillary's emails, you know" so that Papadopolous could then later be charged with espionage.
Here's the print article in which Solomon reports this.
. . .
And yet the Mueller Report -- I mean the Zebley/Weissman report -- dishonestly suggested that Misfud was a Russian agent by citing uninformed media reports, while suppressing the knowledge that they knew as a fact, that he was an FBI agent all along.

I can't even explain how huge that would be. It would prove that the Mueller Report begins with a lie, and that this was a dirty FBI entrapment operation from the start, not seeking evidence of a crime, but trying to concoct a fake crime, all for a pretext to spy on Trump.

They purloined false evidence, represented it to a court as if this was a real crime involving Russian agents, and defrauded the FISA court into giving them an illegally-procured warrant.

If Misfud does in fact admit this, people will have to go to jail.

And I mean Big People.

I can think of one tall one in particular.
Posted by Fritz at 9:29 AM