The circus is coming to town and the carnival barkers are working up a sweat trying to spark interest. So far, ticket sales are slow.

Robert Mueller is slated to appear in Washington’s Big Tent Wednesday when he testifies to two House committees. The former special counsel threw a wet blanket on expectations by vowing he wouldn’t say anything beyond what’s in his report, but the hype machine still promises a sensational show.

Naturally, the anti-Trump media are doing their best to pump oxygen into the dead-of-summer event, with NBC News running this screaming headline on a setup article: “Mueller hearings to highlight ‘shocking evidence of criminal misconduct by Trump,’ Democrats say.”

WaPoo, Democrats hope Mueller gives credence to their claim of an unlawful Trump


Democrats expect Mueller to describe in detail at least five of 10 episodes of possible obstruction that the former special counsel laid out in his report, which found insufficient evidence to show a conspiracy between the Trump campaign and Russia to influence the election and reached no conclusion about whether the president tried to block the probe.
. . .
Democrats do not expect major revelations from Mueller, who will testify for three hours before the House Judiciary Committee and two hours before the House Intelligence Committee. They expect his answers to be short and curt, and have crafted questions that they hope will elicit a narrative from Mueller of a president committing illegal acts who would have faced prosecution if not for Justice Department policy forbidding the indictment of a sitting president.

AP, Fat Jerry Nadler, Mueller hearing to air evidence of Trump wrongdoing  He won an election they thought they had rigged fair and square. Waah! 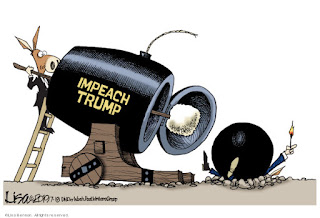 WaPoo again, Rep. Adam Schiff is well-versed in the political ramifications of impeaching a president. The more Nadler and Schiff pontificate from the chair, the better for Trump.

And more, Facts straight from Mueller’s mouth? They won’t put out the gaslighting fire


Now Mueller plans to appear before two congressional committees for public testimony this coming week. Who better to correct the stubborn “alternative facts” about the report than its author?

We’re not optimistic. The aspiration is unimpeachable, but spoon-feeding people the truth does not make them believe it. At best, it’s ineffectual. At worst, it betrays a misunderstanding of the problem. Once people have been the subject of gaslighting, it is difficult — but not impossible — to ungaslight them.

If any gaslighting has been going on, it's been the Democrats and their MSM allies insisting on "collusion with the Russian", and cries of obstruction when then there wasn't any.

And on the Republican side, WJLA, Mueller to face questions on 'Russian agent'


Undaunted, President Trump and his allies on Capitol Hill have seized on the report as a de facto exoneration of the chief executive and pressed for a deeper investigation into an area not covered by Mueller's report: allegations that senior Justice Department and FBI officials abused their powers to spy on the Trump campaign.

That claim received an important endorsement from Attorney General Barr in April, when he testified that "spying did occur" on the Trump campaign, and that it was "a big deal." While the inspector general for the Justice Department, Michael Horowitz, wraps up his 15-month-long review of the conduct of the top DOJ and FBI officials who worked on the Trump-Russia probe starting in mid-2016. Barr has also brought in a seasoned federal prosecutor, John Durham, the U.S. attorney for Connecticut, to expand on the Horowitz review by also examining the conduct of U.S. and foreign intelligence agencies at the time.

Rep. Devin Nunes, R-Calif., has already asked FBI Director Christopher Wray and other officials, in a May 8 letter, to provide more information about the foreign-born mystery man who helped kick-start the FBI's counter-intelligence investigation into the Trump campaign and Russia: London-based professor Joseph Mifsud.

According to the Mueller report, it was Mifsud, a peripatetic habitue of international relations symposia across Europe and Russia, who befriended low-level Trump campaign adviser George Papadopoulos in London in April 2016 and told the young foreign policy analyst that the Kremlin possessed "dirt" on Hillary Clinton, the Democratic nominee, in the form of thousands of her emails. Papadopoulos ultimately pleaded guilty to lying to the FBI about his contacts with Mifsud and other Russian-linked individuals.

That has led GOP lawmakers to question the true role of Mifsud -- who has not been seen publicly since the FBI interrogated him in February 2017. In his May 8 letter to the FBI director and other officials, Nunes cited the professor's presence at an event at the Capitol and his service to academic institutions that have trained NATO personnel. Additionally, published reports have placed Mifsud at the State Department.

"There's a reason why Mueller doesn't really, after 40 million bucks, he can't really tell us who Mifsud is, and stops short of calling him a Russian agent," Nunes told Sinclair in an interview. "Somehow, this Mifsud guy, if he really was a Russian agent, as James Comey has said recently, my God...You have FBI compromised, State Department compromised, Congress compromised. The list goes on and on, and on of the damage Mifsud would have done."

The Justice Department did not respond to a request for comment as to whether Attorney General Barr is focusing on Mifsud. Earlier this year, Nunes sent eight criminal referrals to DOJ in connection with the origins of the Trump-Russia probe, and says he is confident the referrals are receiving proper attention from the top ranks of the Justice Department.

I expect, if Mueller answers any question about Mifsud at all, he will say that he and his team accepted Comey's FBI characterization of Mifsud as a Russian spy without further investigation. They didn't really want to know the truth.

For a clue as to how the media will cover the testimony, Chuck Ross at Da Caller offers CBS Host Repeatedly Interrupts Liz Cheney. The Interview With Adam Schiff Was Completely Different


If I were writing a fictional account of the effort to prove there was “collusion” between the 2016 Trump campaign and the Russians, and the subsequent quest to drive him out of office, I would include a lot of material on how the intelligence services of the United States and Great Britain worked together.
This is not just a good plot, it’s increasingly obvious that it actually happened. As The Washington Examiner reported the other day,


Sir Kim Darroch, the long-time senior British diplomat who had served as their representative in Washington, D.C., since January 2016, “is said to have vouched for the credibility of Christopher Steele, the author of an explosive dossier of claims about Donald Trump’s ties to Russia, in conversation with at least one US official” according to a new article by the Sunday Telegraph, which has reviewed the documents.


According to one current and one former U.S. government official speaking on the condition of anonymity, Darroch repeatedly leaked classified U.S. intelligence information, including highly classified information, to a journalist for a U.S.-based media outlet. The sources are confirmed by the reaction my related inquiries have received from other government officials.

Indeed, the Brits, via MI6, had been an integral part of the scheme all along, from its origins in the trans-Atlantic Intelligence Community’s operation against Michael Flynn. It’s hard to tell if Stefan Halper was working for the CIA, the FBI or MI6 when he hosted General Flynn at Cambridge University, but in my fictional account he’d be in cahoots with all of them.