Russiagate, It Gets to Wearing Thin


Anyone who watched the Robert Mueller debacle on Wednesday has already concluded that it was a total waste of time for Democrats — at best. A new poll out from ABC News/Ipsos confirms that the special counsel’s much-hyped appearances before Congress did nothing to move the needle on impeachment, as House Democrats hoped. Nearly half said it made no difference at all, and the rest were evenly split between making them more likely to support impeachment (27%) and less likely to do so (26%). 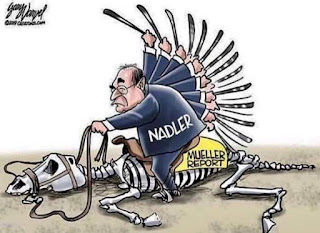 
Nadler praised Mueller’s testimony during an appearance today on This Week With George Stephanopoulos after being asked if it was a mistake to have him under oath.


NADLER: No, I think it was very important that he testify because he established very clearly that the — that the — he broke the lie that the president, the attorney general have been saying to the American people for the last, I don’t know, seven, eight weeks. . . . 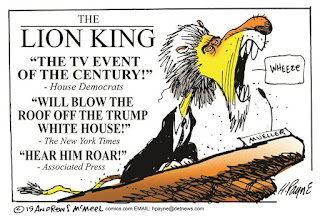 Schiff had the same narrative when on NBC’s Meet The Press, however, he was not happy with Mueller’s tone and answers.


CHUCK TODD: Was there any part of Director Mueller’s testimony you found unsatisfying?
REP. ADAM SCHIFF: You know, look, I, I wish that he had testified in more narrative fashion, that the words didn’t need to be coaxed from him as much as they did. But I think —
CHUCK TODD: You were talking, you were hoping it would bring it alive, is what you said I think last week, right?
REP. ADAM SCHIFF: And I think that it did. But it, it, it came alive, I think, more through very short questions and very short answers rather than a great deal of description from the witness. But Chuck, I think we knew that going into the hearing. And, as you might recall, what I was saying before, we shouldn’t have too many expectations because we know the sum and substance of his testimony. But nonetheless, most people have had that filtered by the misleading characterization by people like Bill Barr. So it was very important to bring him in.

Ha! It appears some Democrats were hoping Mueller would give some sort of soliloquy akin to what is seen in the movies where the witness delivers blow after blow after blow destroying the narrative of the opposite side (all while dramatic music from Hans Zimmer or Howard Shore plays in the background) and people all sitting glued to their TVs immediately run to the city square to start protesting. The reality is the opposite typically happens and the soundtrack is more of the horns of failure from The Price is Right.

According to Nadler, Trump Deserves Impeachment But No Decision Made Yet, because they still haven't figured out their excuse (Bloomberg). His real crime was to beat Hillary in an election they thought they had rigged fair and square. From the NYT (via Hot Air) Is Ousting Trump A Sufficient Goal? Democrats Are Divided Over The Answer, or do they need to demolish our economic and constitutional systems so they can stay in power forever, too? From RCP, NYT's pet "conservative" David Brooks whines "Deus Ex Mueller" Fantasy Didn't Pan Out, Democracy Makes It Hard To "Take A President Out" 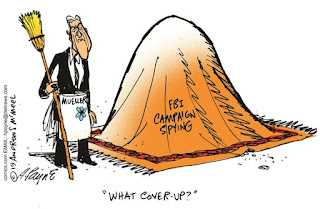 And so, on to "Spygate." From sundance at CTH, Maria Bartiromo to Devin Nunes: “Who is the mastermind behind all of this?”…

Set up like a bowlin' pin, knocked down, it gets to wearin' thin. They just won't let you be, oh no. 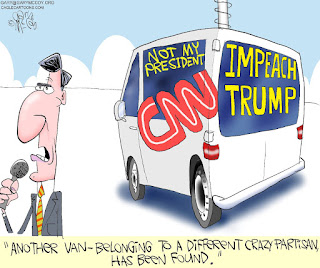 
Rep. Devin Nunes, the top Republican on the House Intelligence Committee, said the CIA has "come clean" for his review of the early stages of the Trump-Russia investigation.

Host Maria Bartiromo asked the California congressman which agency, the FBI or CIA, was more likely to have lined up confidential sources to make contact with members of the Trump campaign, under suspicion for ties to Russia.

“Well, as you know, we have jurisdiction over both FBI and CIA and what they do overseas," Nunes said on Sunday Morning Futures. "We have lots of information about FBI people going overseas and doing things, we don’t really have any information from CIA."

He added, "So far, they’ve really come clean. I would say the only one who has questions to answer is John Brennan, because we now know that John Brennan briefed Harry Reid on the dossier in August 2016. At the same time he never briefed me or Paul Ryan who was the speaker of the House at the time.”


Representative John Ratcliffe is a member of the House Judiciary Committee and House Intelligence Committee. Ratcliffe is one of only a few people who has seen all of the unredacted DOJ and FBI evidence within the documents congress has previously asked the President to declassify.

Ratcliffe’s nomination, and confirmation should be unremarkable.

However, due to the information that Ratcliffe already holds about the overall intelligence community operation in 2015 through 2019, we can expect the deepest part of the Deep State to immediately begin a process to impede any confirmation effort. Ratcliffe is a risk, and he will likely be controversialized in a political effort to block his nomination.

I predict an attempt to block the nomination.

Linked by EBL in Darleen Love: Painkiller, August Alsina: Ghetto, National Water Balloon Day, Tulsi take on Kamala. Update: Gabbard wins Drudge poll, Harriet Tubman was a Republican who supported the 2nd Amendment, Marianne Williamson: I am not a wacky new age nutcase 🌰 Update: Wins Drudge Poll, Once Upon A Time In... Hollywood: A Review,  🐔 Chicken Wing Day 🐔 and Rat Rule 5 🐀🐀🐀.
Posted by Fritz at 7:27 AM