Russiagate While We Swelter

“I have seen each factual assertion listed in that dossier, and then I’ve seen the FBI’s justification. And when you’re citing newspaper articles as corroboration for a factual assertion that you have made, you don’t need an FBI agent to go do a Google search.”

“When the name Sidney Blumenthal is included as part of your corroboration, and when you’re the world’s leading law enforcement agency, you have a problem.”
. . .
Investigators in both Congress and the Justice Department are trying to figure out how inaccurate information made its way into the dossier. One theory is that Russian operatives planted disinformation with Steele, a former MI6 officer, in hopes of smearing Trump.

Blumenthal and inaccurate info, go together like Clinton's and corruption.

Daniel Chaitin, WaEx, Joe diGenova shares conspiracy theory about FBI using Mueller phone to secretly record Trump. It's a conspiracy  when they really are out to get you.

On Lou Dobbs Tonight, diGenova, a former U.S. attorney for the District of Columbia, referred to an interview Mueller had with President Trump in May 2017 about taking over as FBI director after James Comey was fired.

"Something very interesting that hasn't been written about occurred," diGenova told guest host Gregg Jarrett. "Bob Mueller went into that meeting with [Deputy Attorney General] Rod Rosenstein, and it was just three of them in the Oval Office, and Bob Mueller had a telephone, a cellphone," diGenova told Jarrett.

"He left that cellphone in Oval Office after the meeting. And it is now believed by many people that cellphone was used to broadcast the meeting between the president, Rod Rosenstein, and Bob Mueller, back to FBI headquarters, where they recorded the conversation with the president," diGenova said, before adding that Mueller likely left the phone there to "record what happened after they left."

The interview via Sundance at CTH, diGenova and Toensing Discuss Possibilities of Upcoming Mueller Testimony…

Althouse, "Federal prosecutors signaled in a court document released on Thursday that it was unlikely they would file additional charges in the hush-money investigation..."


"... that ensnared members of Donald J. Trump’s inner circle and threatened to derail his presidency. In the document, the prosecutors said they had 'effectively concluded' their inquiry, which centered on payments made during the 2016 presidential campaign to buy the silence of two women who said they had had affairs with Mr. Trump.... The president’s former lawyer, Michael D. Cohen, was convicted in the case. He has said he helped arrange the hush money at the direction of Mr. Trump, and prosecutors have repeated the accusation in court papers. Mr. Cohen is serving a three-year prison sentence."

ADDED: From the comments at the NYT: "Why does trump always get away with everything, every single time? he is completely immune from prosecution, let alone the very most basic of scrutiny. This is untenable and threatens the foundation of our democracy." 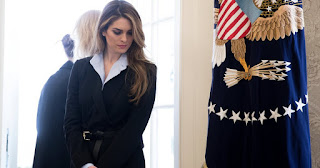 
Lanny Davis is furious over the decision:


Cohen’s attorney, Lanny Davis, however, expressed displeasure with prosecutors decision to drop the proceedings in his own statement issued Wednesday evening.
“Case closed? Why is Michael Cohen — after all his voluntary cooperation and testimony that Mr. Mueller said was credible and went to “core issues” and all the information and documents he voluntarily provided to prosecutors and to congress — the only member of the Trump company to be prosecuted and imprisoned?” Davis said in the statement. “Especially since prosecutors found that virtually all of Michael’s admitted crimes were done at the direction of and for the benefit of Donald Trump? Why?”

Why? Come on, man. We can guess at two reasons the DoJ’s walking away from this. One: Michael Cohen would have to testify to substantiate any charges. Two: Michael Cohen is serving three years at Club Fed for perjury. Not too many prosecutors would go to criminal trial over campaign-finance violations with a convicted perjurer as the main witness in the case.


Even nearly three years later, Republicans still savor and chuckle at the video of the woman in a winter coat and glasses, howling a primordial “Nooooo!” into the cold January air as Donald Trump was inaugurated.
For Democrats, though, Inauguration Day 2017 remains a special kind of wound. As has often been said for going on three years, the Democrats have been trying—with all of the deep state and mainstream media power at their disposal—to undo the 2016 election of Donald Trump.

Democrats feel their opponents must be discredited and destroyed, and their preferred method is lawfare and media innuendo. And, as the ceaseless investigations and legal harassment of the last few years have shown, they have had the power of law enforcement and highly partisan elements of the Department of Justice with which they can exact revenge on Donald Trump and his supporters.
For the first time in memory, Democrats in the Senate have been bullying and frantically urging the Justice Department to investigate all aspects of the opposition party’s inauguration, from individuals connected to the inauguration committee to employees of the Trump Organization, high profile donors and fundraisers, and members of the post-campaign transition team.

For months, federal prosecutors in New York have been on the hunt. Hundreds of news articles breathlessly reporting the inevitable downfall of these officials were created from leaks by deep state operatives in the Justice Department.

Unsurprisingly, it always amounted to nothing.

In a late Friday night news dump last week, prosecutors sheepishly admitted there would probably be no charges filed against anyone in the Trump Organization for inauguration-related activity.