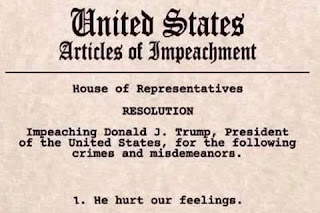 Business Insider, The House just voted down articles of impeachment for President Trump. It was all for show, as was House holds Barr, Ross in criminal contempt, as GOP decries 'more political theater' (Fox). No thanks, we have all we can handle now.

On the bright side, Feds end investigation into Trump Org and hush money payments (CNN). Another dry hole in the endless series looking for the gusher that will end his presidency. However, in an effort to continue the smear,


"The campaign finance violations discussed in the Materials are a matter of national importance," US District Court Judge William Pauley wrote in his decision. "Now that the Government's investigation into those violations has concluded, it is time that every American has an opportunity to scrutinize the Materials."

Pauley ordered a copy of the government's July status report and copies of search warrant materials from the Cohen case to be filed publicly with very limited redactions by Thursday at 11 a.m. ET.


Still, the end of the legal exposure is good enough for Trump and his re-election campaign, most likely. It seems doubtful that hush-money payments will do more damage in 2020 than they did in 2016, or since that period as more of them got exposed. Trump is almost incapable of embarrassment, and if prosecutors don’t see a cause for legal action on the basis of campaign-finance violations from such payments — a legal theory that probably died with the failure of the John Edwards prosecution — then it won’t get much support as a central impeachment issue, either.

One final thought on this development: it sure looks like Michael Cohen was bluffing on his way to federal prison, no?

Kind of shocked he’s not more focused on California trying to prevent him from practicing law:https://t.co/0rV72tsCUk
— LB (@beyondreasdoubt) July 17, 2019

Finally, a little more news on the Steele Dossier as John Solomon checks the boxes, FBI's spreadsheet puts a stake through the heart of Steele's dossier


But lest anyone be tempted to think Steele’s 2016 dossier is about to be mysteriously revived as credible, consider this: Over months of work, FBI agents painstakingly researched every claim Steele made about Trump’s possible collusion with Russia, and assembled their findings into a spreadsheet-like document. The over-under isn’t flattering to Steele.

Multiple sources familiar with the FBI spreadsheet tell me the vast majority of Steele’s claims were deemed to be wrong, or could not be corroborated even with the most awesome tools available to the U.S. intelligence community. One source estimated the spreadsheet found upward of 90 percent of the dossier’s claims to be either wrong, nonverifiable or open-source intelligence found with a Google search.

In other words, it was mostly useless.

“The spreadsheet was a sea of blanks, meaning most claims couldn’t be corroborated, and those things that were found in classified intelligence suggested Steele’s intelligence was partly or totally inaccurate on several claims,” one source told me.
The FBI declined comment when asked about the spreadsheet.

The FBI’s final assessment was driven by many findings contained in classified footnotes at the bottom of the spreadsheet. But it was also informed by an agent’s interview, in early 2017, with a Russian that Steele claimed was one of his main providers of intelligence, according to my sources.

The FBI came to suspect that the Russian misled Steele, either intentionally or through exaggeration, the sources said.

The spreadsheet and a subsequent report by special prosecutor Robert Mueller show just how far off the seminal claims in the Steele dossier turned out to be.

But it was good enough to start the investigation. CNS News Rep. Nunes Fears Mueller Is 'Back-Channeling' With Democrats As He Prepares for Hearings. Well, he should ask him about that when he gets the chance.