Althouse reads Lawfare so you don't have to  "Mueller is...likely to be grumpy when you question him. And who can blame him? You would be grumpy too if you were being subjected to hours of unwanted hectoring by your colleagues, many of whom are not very bright..."

"... will not have done their homework, and will want to yell at the man and ask him things that would be wildly inappropriate for him to answer. But you are that rare thing: a diligent member of Congress who wants to use your time with Mueller to bring out important findings and nuances of the Mueller report. What do you do?"

Writes Benjamin Wittes in "If I Had Five Minutes to Question Robert Mueller." From the advice:


[A]sk him questions to which you know the answer. This is not an investigative hearing. It is an exercise in political and legal theater, and you are trying to provide a compelling elucidation of Mueller’s work and findings. Ask only questions you know he can answer and whose answers you know will reasonably contribute to the thread you are developing.

At least he's admitting it's all for show. Margot Cleveland at Da Fed claims  Having Mueller’s No. 2 Testify To Congress Will Hurt Democrats More Than Trump

While the general populace viewed Mueller as an apolitical straight-shooter (at least until he put his name to a final report that exposed him as a political hack), those familiar with Weissmann’s prosecutorial and professional history held a much different view of the number two man. Yet, even now, only a small segment of society knows Weissmann’s name, much less the details about his questionable background. That will change soon with Democrats’ decision to call Weissmann to testify, thrusting Mueller’s sidekick into the spotlight—blemishes and all.

And Weissmann’s warts are many. First, we have Weissmann’s applause for the insubordination former acting attorney general Sally Yates showed President Trump. “I am so proud. And in awe. Thank you so much. All my deepest respects,” Weissmann emailed Yates upon learning that Yates had refused to fulfill her duty to defend Trump’s travel ban and had instructed Department of Justice attorneys to do likewise. Trump immediately fired Yates, while Mueller later chose Weissmann to lead the special counsel team.

We also have Weissmann’s financial support of the Democratic National Committee and Hillary Clinton through thousands in campaign contributions. The Wall Street Journalalso reported that Weissmann attended Clinton’s 2016 election night party in New York City, further raising the specter of an anti-Trump bias at play.

Then there are questions concerning Weissmann’s meeting with Associated Press reporters on April 11, 2017, about Trump’s onetime campaign chair, Paul Manafort. The following day, the AP published an “explosive expose,” detailing Manafort’s purported dealings with Ukrainian officials, including approximately $1.2 million in payments recorded in a handwritten ledger in Ukraine, suggesting Weissmann had leaked details to the journalists during the April meeting.

Weissmann’s meeting with the AP reporters pre-dated the special counsel investigation, as did Weissmann’s knowledge of the Steele dossier and author Christopher Steele and Fusion GPS Founder Glenn Simpson’s meetings with DOJ lawyer Bruce Ohr. Yet many in the media have ignored Weissmann’s early involvement in the investigation into the Trump campaign—even after Ohr’s reveal in his congressional testimony that, in fall 2016, he shared with Weissmann information peddled by Steele and Simpson. This fact suggests Weissmann knew that the FBI was using Ohr as a conduit for Steele’s supposed intel after the FBI had terminated its confidential human source relationship with Steele for lying.

The key phrase is "if handled correctly". What are the chances? John Sexton at Hot Air, Carl Bernstein: The Media Made A Big Mistake In Coverage Of The Mueller Report. Gosh durn it, they were just too nice to Trump!


“We’re in a cold civil war in this country. The figures of Trump’s approval rating is a reflection of that cold civil war and how appealing his message has been to almost half the people in this country,” he said. While it’s not completely clear what Bernstein expects the media to do at this point, he clearly wants the media to spread the negative coverage more broadly: “We are not making in the press the connections between what’s going on in the country and Donald Trump, the president.”

And a link between Mueller and burgeoning Epstein scandal? Whoa whoa WHOA! Thread from 2018 about possible connection between Jeffrey Epstein and Mueller’s FBI is enlightening. Yeah, Mueller's had his hands in a lot of the FBI's recentish mistakes. 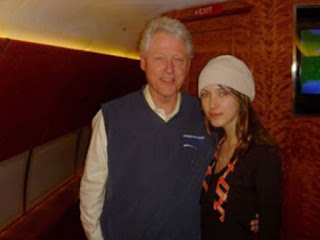 So, will the Epstein prosecution be turned into a weapon against Trump? In the newest  story, Jeffrey Epstein charged with federal sex trafficking crimes involving young girls, WaPoo managed to mention Donald Trump before Bill Clinton and in Epstein indictment renews questions about earlier case handled by Trump Cabinet official, they stress that the prosecutor in Epstein's previous case, Alexander Acosta is now a Trump Labor Secretary.


At his 2017 confirmation hearing, the only senator to ask him about the plea deal was Sen. Tim Kaine (D-Va.).

Acosta told Kaine that “professionals within a prosecutor’s office” decided on the deal, taking himself out of the negotiations. On Monday, Kaine called for Acosta’s ouster.

Stacy McCain. MSNBC and CNN Are Trying to Spin the Jeffrey Epstein Scandal Against Trump


Everybody with access to a computer can discover that Bill Clinton took dozens of flights on billionaire sex offender Jeffrey Epstein’s private jet, nicknamed the “Lolita Express,” and yet viewers of the liberal cable channels are being treated to a warped version of the story in which Epstein is falsely depicted as Donald Trump’s best friend, and the realscandal involves Trump’s Secretary of Labor Alex Acosta.
This partisan spin is being replicated on broadcast network news, as Kristine Marsh of Newsbusters notes that ABC’s Good Morning America(hosted by former Clinton aide George Stephanopoulos) covered the latest Epstein charges without even mentioning Bill Clinton:


CBS and NBC, on the other hand, tried to connect Epstein to Trump. While NBC’s Stephanie Gosk gave a passing mention to both Clinton and Trump (without any mention of the “Lolita Express”), CBS This Morning’s Mola Lenghi spent more time on both Trump and Clinton, while emphasizing comments Trump made praising Epstein in 2002:


Epstein has had several high-profile friendships in the past. Bill Clinton reportedly rode on his jet more than a dozen times in the early 2000s. In a 2002 interview, then private citizen Donald Trump called Epstein ‘a terrific guy’ and ‘it’s even said he likes beautiful women as much as I do, and many of them, are on the younger side.’

However, Lenghi didn’t mention that after Epstein had been convicted of assaulting an underage girl, Trump had barred him from Mar-a-Lago. All three networks didn’t mention either that Epstein was a major donor to Democrats for years, a fact that most certainly would’ve made the cut had he donated to Republicans.

“Democratic Party operatives with bylines,” as someone keeps saying.

From Red State, Users On Wikipedia Are Trying To Quietly Edit Out Democratic Connections In Epstein’s Bio, while Nancy Pelosi's daughter admits, "It is quite likely that some of our faves are implicated..." and Hollywood, Media Partied With Epstein After His Plea To Soliciting Underage Girl, Clintons Invited His ‘Fixer’ To Chelsea’s Wedding. They were pretty chummy with Harvey Weinstein too, for a long time, knowing his proclivities, and Roman Polanski is still one of their deities. It's like they don't take this war on women stuff seriously or something. Bill Clinton Denies Knowing Anything About His Pedophile Friend Jeffery Epstein But Flight Logs Show Otherwise. Really Bill? On the other hand, Donald Trump Helped Build a Case Against Jeffrey Epstein


Interviewed by The Conscious Resistance outside the courthouse after the settlement announcement, Edwards was asked about accusations that President Trump has been involved in the same things as Epstein.

“The only thing that I can say about President Trump is that he is the only person who, in 2009 when I served a lot of subpoenas on a lot of people, or at least gave notice to some pretty connected people, that I want to talk to them, [Trump] is the only person who picked up the phone and said, let’s just talk. I’ll give you as much time as you want. I’ll tell you what you need to know, ” Edwards recalled.

He added about the president, “[He] was very helpful, in the information that he gave, and gave no indication whatsoever that he was involved in anything untoward whatsoever, but had good information.”

Edwards was also asked about the rumor in a Patterson book that Trump actually had Epstein kicked out of Mar-a-Lago for hitting on an underage girl.

Edwards also heard that Epstein hit on the underage daughter of a member of his club so Trump banned him. Edwards wasn’t sure if that’s true.


Reuters also wants you to know that the prosecutor who made that deal was Alex Acosta, who is President Trump's secretary of Labor, but they didn't bother to mention Mueller was running the FBI at the time Epstein got a slap on the hand. USA Today, which is just total garbage, wants you to know there is a Trump-Epstein connection because they put it in the title that Epstein was an "associate" of Trump.


Has anyone noticed that Democrats have become a lot quieter on the subject of impeachment lately? Robert Mueller will testify before the House Judiciary Committee in ten days, but the fevered demands for Donald Trump’s removal have receded. One key result from the latest Washington Post/ABC poll shows why:

37% support for Congress initiating impeachment proceedings against Pres. Trump in new @ABC News/WaPo poll, unchanged since April, while opposition to this step has grown by 13 points to 59%. https://t.co/wzDsLdnyu1 pic.twitter.com/hLPY7zf5Qz
— ABC News (@ABC) July 7, 2019