Neandertal Children in the News 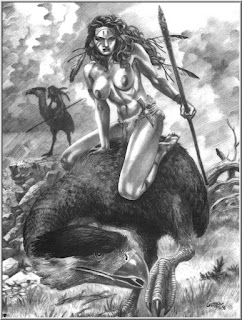 The Pleistocene was brutal: Bones of a Neanderthal Child Eaten by Giant Bird Discovered in Poland

Scientists have discovered the bones of a Neanderthal child who had been eaten by a giant bird. The finger bones appear to have come from a child aged between five and seven. Whether the bird attacked the child, or if it scavenged the bones, is not yet clear.

The remains, discovered in Poland, date back over 115,000 years. They are the oldest ever found in the country, and have provided researchers with new insight into how and where our ancient relatives lived. Before now,  the oldest human remains found in Poland dated to around 50,000 years.
. . .
“We have no doubts that these are Neanderthal remains, because they come from a very deep layer of the cave, a few meters below the present surface. This layer also contains typical stone tools used by the Neanderthal,” Paweł Valde-Nowak, from the Institute of Archeology at Jagiellonian University, told Science in Poland.

The bones from the child’s hand were found to be porous, with lots of tiny holes over the surface. "Analyses show that this is the result of passing through the digestive system of a large bird. This is the first such known example from the Ice Age,” Valde-Nowak said.

A large bird could have potentially attacked a small Neanderthal child, he said. Alternatively, the bird could have scavenged the bones from a dead body. At the moment, the researchers say, either option is plausible.

Although there were huge flightless birds in South America and Australia during the period, I've been unable to find any in Europe. Perhaps a Golden Eagle or a large owl could carry off some remains, but how would they end up deep in a cave? 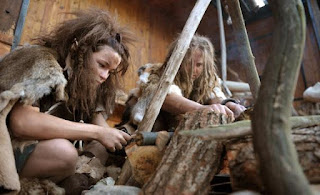 But that's not the only danger for Neandertal kids in the good old days, Neanderthal teeth reveal lead exposure and difficult winters


A new study of oxygen isotope ratios and heavy metals in the tooth enamel of Neanderthals who lived and died 250,000 years ago in southeast France suggests that they endured colder winters and more pronounced differences between seasons than the region’s modern residents. The two Neanderthals in the study also experienced lead exposure during their early years, making them the earliest known instances of this exposure.

Tooth enamel forms in thin layers, and those layers record the chemical traces of a person’s early life—from climate to nutrition to chemical exposures—a little like tree rings on a much smaller scale. Archaeologist Tanya Smith of Griffith University and her colleagues examined microscopic samples of tooth enamel from two Neanderthal children from the Payre site in southeastern France. The teeth were dated to around 250,000 years ago based on thermoluminescence testing on nearby burned flint, and the set of samples recorded about three years of life. 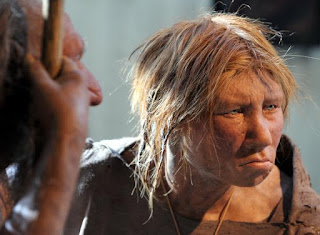 The cold seasons were hard on Neanderthal children, because both of the ones from Payre bear lasting traces of illness or malnutrition during their early years. That kind of physiological strain impacts how the body absorbs and processes minerals, including the ones in tooth enamel, and that can leave a visible line across the tooth, marking the layers of enamel added during tough times. On a lower-left first molar from one child, Payre 6, the layers of enamel laid down during the late winter or early spring, not long before the child's second birthday, show a line marking about a week of sickness or starvation. And another child, Payre 336, apparently suffered a similar two-week episode in the winter and another week the next fall.

Other studies have noticed that Neanderthal teeth often bear the lines left by these periods of hardship; according to Smith and her colleagues, many of those episodes probably happened during the cold, difficult months of later winter and early spring.


Heavy metals in the bloodstream eventually settle in bones and teeth, and Payre 6's tooth enamel contained noticeable amounts of lead from the time the child was about 2.5 months old. Around nine months of age, in the depths of winter, a band marks a sudden spike in lead exposure—about 10 times as high as the lead levels recorded in the rest of the tooth. A little over a year later (about two months after the bout of sickness already mentioned), another band of concentrated lead marks a sudden increase in exposure in late winter or early spring.

Payre 336 also seems to have been exposed to high levels of lead, once in the spring and again in the winter or late fall.

That’s the oldest physical evidence of lead exposure archaeologists have uncovered so far, and it’s probably a consequence of sheltering in caves close to underground lead deposits. At least two lead mines lie within 25km (15.5 miles) of the Payre site, well within Neanderthals’ likely foraging range. The early, constant lead exposure may have come from contaminated water or juice; Smith and her colleagues say milk probably isn’t to blame because that would also have deposited extra barium in the enamel.

I'm sure glad I live in an interglacial. How about you?