Did a Greenland Meteorite Strike Cause the Younger Dryas? 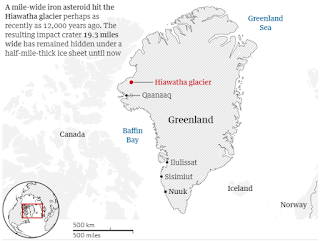 
A huge impact crater has been discovered under a half-mile-thick Greenlandice sheet. The enormous bowl-shaped dent appears to be the result of a mile-wide iron meteorite slamming into the island at a speed of 12 miles per second as recently as 12,000 years ago.

The impact of the 10bn-tonne space rock would have unleashed 47m times the energy of the Little Boy nuclear bomb dropped on Hiroshima in 1945. It would have melted vast amounts of ice, sending freshwater rushing into the oceans, and blasted rocky debris high into the atmosphere.

At 19.3 miles wide, the crater ranks among the 25 largest known on Earth and is the first to be found beneath an ice sheet. “You have to go back 40 million years to find a crater of the same size, so this is a rare, rare occurrence in Earth’s history,” said Kurt Kjær, of the Natural History Museum of Denmark in Copenhagen.

Scientists first suspected a crater in 2015 when they spotted a huge depression in Nasa radar images of the bedrock beneath the Hiawatha glacier in north-west Greenland. Kjær, who passes a 20-tonne meteorite to reach his office every day, wondered if such a space rock might be the culprit. “It all snowballed from there,” said Joseph MacGregor, a senior scientist on the team at Nasa’s Goddard Space Flight Center in Maryland.
. . .
So far it has been impossible to put a firm age on the crater, but its condition suggests it formed after ice began to cover Greenland about 3 million years ago. But the crater may have formed much more recently. The radar images show that while the surface layers of the glacier immediately above the crater look normal, deeper layers that are older than 12,000 years are badly deformed and strewn with rocks, with some lumps as big as trucks. 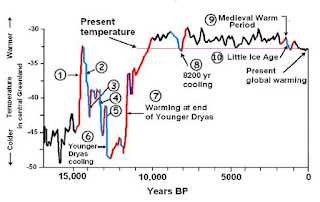 So, the Younger Dryas started about 12,000 years ago. When I saw this article I immediately thought about the possibility that it triggered the Younger Dryas, a thousand year cool period that occurred as the world was coming into the current interglacial.  Shockingly, I didn't get to that idea first: Massive crater under Greenland’s ice points to climate-altering impact in the time of humans


The news of the impact discovery has reawakened an old debate among scientists who study ancient climate. A massive impact on the ice sheet would have sent meltwater pouring into the Atlantic Ocean—potentially disrupting the conveyor belt of ocean currents and causing temperatures to plunge, especially in the Northern Hemisphere. "What would it mean for species or life at the time? It's a huge open question," says Jennifer Marlon, a paleoclimatologist at Yale University.

A decade ago, a small group of scientists proposed a similar scenario. They were trying to explain a cooling event, more than 1000 years long, called the Younger Dryas, which began 12,800 years ago, as the last ice age was ending. Their controversial solution was to invoke an extraterrestrial agent: the impact of one or more comets. The researchers proposed that besides changing the plumbing of the North Atlantic, the impact also ignited wildfires across two continents that led to the extinction of large mammals and the disappearance of the mammoth-hunting Clovis people of North America. The research group marshaled suggestive but inconclusive evidence, and few other scientists were convinced. But the idea caught the public's imagination despite an obvious limitation: No one could find an impact crater.

Proponents of a Younger Dryas impact now feel vindicated. "I'd unequivocally predict that this crater is the same age as the Younger Dryas," says James Kennett, a marine geologist at the University of California, Santa Barbara, one of the idea's original boosters.

But Jay Melosh, an impact crater expert at Purdue University in West Lafayette, Indiana, doubts the strike was so recent. Statistically, impacts the size of Hiawatha occur only every few million years, he says, and so the chance of one just 13,000 years ago is small. No matter who is right, the discovery will give ammunition to Younger Dryas impact theorists—and will turn the Hiawatha impactor into another type of projectile. "This is a hot potato," Melosh tells Science. "You're aware you're going to set off a firestorm?"

The Younger Dryas likely played an important role in the settlement of the New World by paleo- Amerindians. Clovis culture seems to have been established over wide areas of the North American by the time of the Younger Dryas, and disappeared afterwards.

Linked by EBL in Step your Thanksgiving turkey up...
Posted by Fritz at 6:04 PM