Big news this morning on the Mysterious Mr. Mifsud front. He's still alive and willing to testify before the Senate: “Spygate” Figure–Suspected to be Dead by DNC–Willing to Testify Before Senate


A lawyer for the Maltese professor who told former Trump campaign adviser George Papadopoulos that the Russians had “dirt” on Hillary Clinton says his client will testify in front of the Senate.

BuzzFeed reports that Stephan Roh, attorney for Professor Joseph Mifsud, wrote in an email that Mifsud “is to testify in front of the US Senate — we are working towards his appearance.”

Lawyers for the Democratic National Committee wrote in a September court filing for their Russia lawsuit that they believed Mifsud was “missing and may be deceased.”

According to the Daily Caller, an attorney for Republicans on the Senate Intelligence Committee reached out Roh on Oct. 24, hoping to obtain an interview with Mifsud. The mysterious professor hasn’t been seen in public since November 2017, after Papadopoulos entered a plea deal with Special Counsel Robert Mueller’s office.

The DNC was hoping he was dead, so he couldn't testify how he set up Papadopuolos and behalf of the FBI and the CIA, ultimately in service to the Clinton campaign.

The inner workings of the Mueller investigation are a total mess. They have found no collusion and have gone absolutely nuts. They are screaming and shouting at people, horribly threatening them to come up with the answers they want. They are a disgrace to our Nation and don’t...
— Donald J. Trump (@realDonaldTrump) November 15, 2018


Witches are small game compared to presidents. But he has a point, they've gone of on a tangent trying to indict anyone who supported Trump. WaEx: Trump's written answers for Mueller fire up talk of a secret subpoena fight


President Trump’s legal team is preparing to give written answers n Russia questions to special counsel Robert Mueller, according to news reports — adding fuel to speculation that Trump is secretly fighting a subpoena to compel his testimony.

The theory that Trump is appealing an order requiring in-person testimony is guesswork, largely based on a journalist overhearing a conversation that connected a mysterious court fight to Mueller's investigation — and the latest reports arguably support either side of the debate.

So they got nothing. Being a journolist is easy. Just make up some shit. Ace: McConnell Blocks Grandstanding Flake's Unconstitutional Bill to Make Mueller Unfirable


Someone needs to invent a robot that will just follow these guys around patting them on the back and cooing, "You're so brave and special," so that they will stop making spectacles of themselves.


A federal judge refused Thursday to dismiss the indictment of a Russian firm accused by Special Counsel Robert Mueller of funding part of a Russian effort to influence the 2016 U.S. election. Concord Management and Consulting - owned by Yevgeniy Prigozhin, a Russian businessman known as "Putin's chef" because of his ties to Russian President Vladimir Putin - had asked to dismiss the case, saying prosecutors "made up a crime" to criminalize election trolling and political speech.

In a 31-page opinion, U.S. District Judge Dabney Friedrich of the U.S. District Court for the District of Columbia rejected that argument, saying prosecutors properly charged Concord with conspiring to obstruct the lawful functions of the U.S. government by evading foreign election and lobbying disclosure requirements and concealing its interference in the American political process. The company is accused of using a far-reaching fraudulent social media campaign to influence the election.

"Concord's concerns amount to a single attack: that the government has charged Concord based on conduct that is not illegal," Friedrich wrote. "But Concord cannot escape the fact that the course of deceptive conduct alleged is illegal." Friedrich added: "The key question . . . is not whether the defendants' agreed-upon conduct violated [disclosure laws] - or any other statute - but whether it was deceptive and intended to frustrate the lawful government functions" of the Justice and State departments and Federal Election Commission, which regulate foreign involvement. "At this stage, that is more than enough," she said.
. . .
Separately, the decision by the federal judge Thursday contained a caution to prosecutors.

Concord's attorneys, led by Eric Dubelier, had argued that Mueller's office "made up a crime to fit the facts they have," seeking to invent a way to police "what people say on the Internet." The government could not show Concord knew or willfully avoided disclosure requirements, Dubelier added, calling them vague.

Friedrich said that while there was "plenty" of evidence of deceit - including "impersonating U.S. people and entities online, using stolen identities to hide the source of online payments, using computer infrastructure to evade detection, and destroying evidence" - the difficulty for the government would be connecting that deceit to existing federal disclosure laws. "The government may ultimately have to prove that the defendants agreed to a course of conduct that, if carried out, would require disclosure" to the Federal Election Commission or Justice Department, Friedrich said.

538: Democrats Can Help The Mueller Investigation Now. But They Also Might Make Things Worse. Yeah, what are the chances of Congress making something worse? Statistically, about 97%.

Vice News: Acting AG Matt Whitaker worked for a company that hawked “time travel” technology and other insane products and democrat lawyers defend socialism, which works about as often as time machines and kills millions of people.

I want to see @MichaelAvenatti disbarred, bankrupted, convicted of multiple felonies, and sentenced to a maximum security prison for life without parole.

But first, can we get Twitter to ban him?
— The Patriarch Tree (@PatriarchTree) November 14, 2018


Red State: BREAKING. Michael Avenatti Discovers Being Tried In The Media Is A Bad Thing. What, you mean PT Barnum was wrong? Never-Trumper AllahPundit wonders Was Avenatti Set Up? Could be, but it couldn't happen to a better person. PJ Media: Michael Avenatti Blames Pro-Trumper for Arrest: 'I Am Coming for You Jacob Wohl aka Surefire'

First Mueller and now me. When we are fully exonerated I am coming for you Jacob Wohl aka Surefire.
— Michael Avenatti (@MichaelAvenatti) November 15, 2018

I just filed a police report about Michael Avenatti's threat. Thank you to the brave men and women of law enforcement!
— Jacob Wohl (@JacobAWohl) November 15, 2018 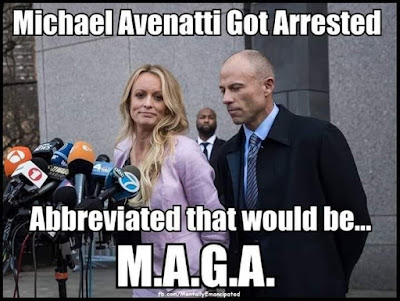 Copy-Paste Error Reveals Assange Already Facing US Indictment Regardless of how you feel about Assange, the fact that the US accidentally reveals it's own secrets in a court filing is pretty ironic.