Embattled Attorney General Jeff Sessions resigned at the "request" of President Donald Trump on Wednesday after more than a year of public criticism from the president.

Whitaker also will assume oversight of the ongoing investigation by special counsel Robert Mueller into Russian interference in the 2016 presidential election, and possible collusion by Trump's campaign in that meddling, according to the Justice Department.

Whitaker, who has publicly criticized the Mueller investigation, by law can serve as acting AG for a maximum of 210 days. He will have the power to fire Mueller "for cause" as outlined under rules governing the special counsel's office, if such cause is found.


Because he wrote an Op-Ed expressing his opinion that Robert Mueller had overstepped his authority.

I know you're all shocked.

I'll tell you what: If this Whitaker guy really offers a firm and final rebuke of Schumer's gamesmanship, who knows, maybe he could be worthy of being AG.

And while the Democrats express outrage that Trump asked for Sessions' resignation, let's see what Democrats were saying last year...

NEW: Per @PeteWilliamsNBC -- Rod Rosenstein will cease oversight of Mueller investigation. Acting AG expected to step in -- but can only fire Special Counsel "for cause"
— Reggie Cecchini (@Cecchini_DC) November 7, 2018

Americans must have answers immediately as to the reasoning behind @realDonaldTrump removing Jeff Sessions from @TheJusticeDept. Why is the President making this change and who has authority over Special Counsel Mueller’s investigation? We will be holding people accountable. https://t.co/weykMuiCxm
— (((Rep. Nadler))) (@RepJerryNadler) November 7, 2018 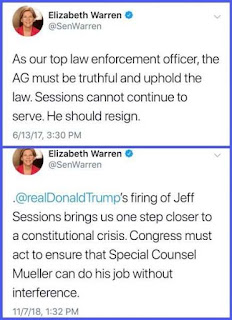 WSJ: Trump, at News Conference, Vows to Retaliate Against Any Investigations. Why we like Trump. He fights.

ChiTrib. Sessions' ouster throws future of special counsel probe into question. It sure does.


As the ultimate supervisor of the investigation, Whitaker could sharply curtail Mueller's authority, cut his budget or order him to cease lines of inquiry.

However, Whitaker's role could still be reviewed by ethics officials. Comments he has made about Mueller's investigation could put pressure on him to recuse himself, as Sessions did.

A legal commentator before he came into the Justice Department, Whitaker has mused publicly about how a Sessions replacement might reduce Mueller's budget "so low that his investigation grinds to almost a halt."

He wrote in a September 2017 column that Mueller had "come up to a red line in the Russia 2016 election-meddling investigation that he is dangerously close to crossing" after CNN reported that the special counsel could be looking into Trump and his associates' financial ties to Russia.

Noah Feldman at NYPo, With the election done, expect Mueller to make his move


With the election over, Mueller will be back in action. His team will likely have more indictments to make.

Mueller will also have to decide how to communicate the information he has gathered to Congress. Last week, a federal judge ordered the release of a 1974 grand jury report that was part of special prosecutor Leon Jaworski’s report to Congress about President Richard Nixon. The document could have lessons for Mueller.

Of course, Mueller’s investigation has worked quietly and methodically so far, and we don’t know how quickly he might act after the election — only that he is free to do so.

This was pre-Whitaker, so perhaps Feldman needs to back track and recalculate. Vanity Fair: “I’m Very Worried About Don Jr.”: Forget the Midterms—West Wing Insiders Brace for the Mueller Storm


One potential sign of how seriously Trumpworld is treating the Mueller threat has been the near total silence of Rudy Giuliani. A constant presence on cable news over the summer, Giuliani hasn’t been on television in weeks. “What the hell happened to Rudy?” a former White House official said when I asked about Giuliani’s whereabouts. According to three sources briefed on Trump’s legal team, Giuliani has been in Europe visiting consulting clients as well as preparing a report with Trump lawyers Marty and Jane Raskin that is designed to provide a counter-narrative to Mueller’s document. “They don’t know what Mueller has but they have a good idea and they’re going to rebut it,” one Republican close to Giuliani said. But another source said Trump instructed Giuliani to stay off television to avoid hurting Trump’s midterm message. “Trump’s thinking is, ‘I gave you a lot of rope and now you got a lot of rope marks around your neck,’” the source said.

I think it's fair to state that Mueller will not report to the public while Whitaker is Acting AG, and with Whitaker applying the brakes, he may try to hang on until an official AG is confirmed by the Senate. Good thing the Republicans enlarged their Senate majority, and lost a few anti-Trump Republican Senators at the same time.
Posted by Fritz at 8:08 AM