New Sewer Tunnel Kept 3.3 Billion Gallons Of Sewage Out Of Anacostia River. Why Isn’t It Any Cleaner?

The Anacostia River was supposed to get a lot cleaner this past summer, after DC Water completed a major new sewer tunnel. But water testing shows bacteria counts were, in some cases, higher in the summer of 2018 compared to 2017.

What happened? The short answer: rain. Lots and lots of rain. 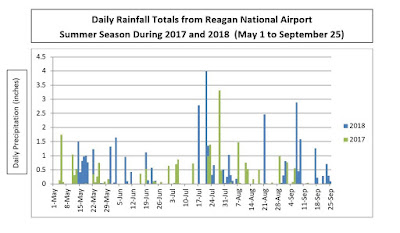 D.C.’s combined sewer system mixes stormwater and sewage in the same pipes. When storms fill up those pipes, the system is designed to overflow into the Anacostia and Potomac Rivers and Rock Creek. The water utility is under a consent decree with the Environmental Protection Agency to stop dumping into the waterways. The first major part of that project went online in March. So far, the new tunnel system has captured and treated 3.3 billion gallons of combined sewage and stormwater — the equivalent of 5,000 Olympic-sized swimming pools. The tunnel is performing better than expected, preventing 89 percent of overflows, compared to the 81 percent DC Water expected.

Still, the tunnel was no match for what Mother Nature had in store. Year-to-date, 2018 is Washington’s second-rainiest year on record (trailing 1889 by a fraction of an inch). And the rain has tended to come in big bursts — which are more likely to overwhelm the drainage system and cause overflows. There was so much rain that 300 to 400 million gallons spilled into the Anacostia despite the new tunnel (this is still less than one Olympic-sized poolful).

When I worked in the Anacostia River, we had to get Hepatitis A shots. I still would.
Posted by Fritz at 4:44 PM