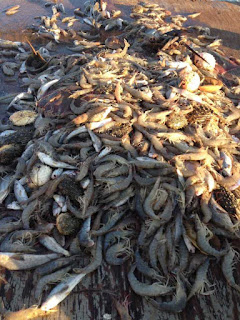 
If you head to a restaurant in Virginia Beach, you might just find freshly caught Virginia shrimp on the menu. That's thanks to an experimental fishing permit given to two local fishermen.

Deputy Chief of Fisheries Management for the Virginia Marine Resources Commission Patrick Geer said in recent years, they have seen waters along the East Coast starting to warm. That, in combination with a few other factors, has caused an increase in larvae to settle in our area, meaning more shrimp are surviving in our waters.

"So folks have started asking, 'Hey, can we have a commercial fishery for this?'" Geer said. 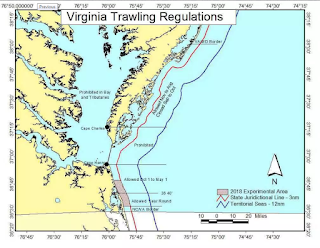 The answer is yes, but only on a very small scale. The commission has approved two experimental fishing permits for an area off the coast of Virginia Beach.

That area is on Dam Neck Road south on the Virginia/North Carolina border, east three nautical miles to the jurisdictional line. Each crew must follow the same regulations set by other fisheries along the coast, but there are slight modifications. In other states, Greer said shrimp trawlers use about a 220-ft. net to catch the shrimp, but the men with the experimental permit are only using a 16-ft. beam trawl equipped with a bycatch reduction device.

"Trawling is illegal in Chesapeake Bay; that's been banned for quite a while now. But there are small areas in the ocean off the Virginia Beach shore [where] trawling is allowed during certain times of the year, if our commission allows [it]," Greer said.

Despite the "bycatch reduction devices", as the photos accompanying the article show, a fair amount of bycatch is inevitable.  I was struck by the number of Atlantic Puffers in the photo. They must be slow enough to have trouble dodging or exiting the trawl.

We do have commercial sized shrimp in the Bay; I recall several that were brought into the lab from fish trawling, but they've never be abundant enough to consider a fisher worthwhile.
Posted by Fritz at 2:51 PM