A Sad Story, But a Happy Ending

Sinatra, a blue-eyed Husky from Brooklyn, turns up in Florida after 18 months missing


Beloved by his teenage owner and her parents, Sinatra disappeared after the girl died in a tragic gun accident. Then earlier this month, he wandered into a neighborhood where people tracked down his family and arranged for them to be reunited this Sunday.

But Sinatra can’t explain what happened in between — an 18-month, 1,200 mile journey that took him from his home in Brooklyn to the streets of Seffner.  Neither can his owners or the family who found him. “I didn’t believe it at first, but when I saw the picture, I broke down in tears,” said Lesmore Willis of Brooklyn, whose 16-year-old daughter Zion Willis died in the accident at a friend’s house in November 2015. The dog had been Zion’s constant companion.

Rose Verrill, 13, found the dog wandering near her Lenna Avenue home in Seffner and her family launched a search with help from friend Jeanne Baldi. A local veterinarian removed an identification chip from Sinatra but couldn’t recover much information. They turned to the Hillsborough County Pet Resource Center and came up with a possible owner’s name and a phone number. But the name, Willis Les, turned out to be convoluted and number was wrong — just one digit off. 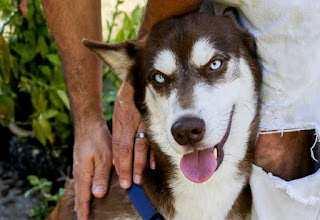 Oh, I thought chips were perfect!

With what information she had, Baldi took to social media. She decided to reach out to a Lesmore Willis whom she found there.
“I never would have thought he was from Brooklyn,” Baldi said. “I messaged Lesmore over Facebook and didn’t think it would lead to anything when I saw where he was from.”

But within a few days, Willis messaged back, saying he used to have a dog but it had been missing for a very long time. Comparing notes, they both spoke of an animal that had a problem with its right foot

Then Baldi decided to send along the photo. Immediately, the mystery of where Sinatra ended up — if not how he got here — was solved. Willis was overcome by emotion, Baldi said, thinking for months that this link with his daughter had been lost to him and his wife Maria. “I told him that he was safe and well taken care of with Denise,” Baldi said.

In his temporary home, Sinatra — like his blue-eyed namesake — seems to enjoy breaking into song. He does a duet with another family dog. “It’s the funniest thing,” said Rose’s mother, Denise Verrill. “He’s been such a wonderful guest and such a sweet dog. I can see why they love him so much.”

In Brooklyn, the grieving Willis family had suffered an added blow when Sinatra disappeared 18 months after Zion’s death. “He’s known throughout the neighborhood as the dog who runs off to chase raccoons and squirrels,” Willis said. “He’s done it before, but usually he comes back no more than 30 minutes later, and he never came back.”

Siberians are well known as escape artists. Sounds like the Willis's were not very good at keeping him secured. It can be tough. Skye has escaped at least 4 times, once in Canonsburg. Her saving grace is that she always goes to someone, anyone. That's why we have our phone number on her collar. It's much quicker than reading a chip.
Posted by Fritz at 7:27 PM