Take Out the Trash

The Virginian-Pilot reported last week that flooding driven by ocean tides often drags trash and other waste into the nation's largest estuary.

Mulholland and a team of students and volunteers are collecting floodwater samples. The data so far show that an entire year's worth of nitrogen from land runoff poured into the Lafayette River during one tidal flooding event.

Not a great surprise here, except that scientists express surprise. Anyone who's walked on the bay or it's tributaries shorelines knows that it has plenty of trash ready to be moved around if the water floods to their level. That, combined with a wind pushing off the bank can produce a massive movement of trash to formerly clean areas.

With the PlasticWatch project, scientists are working with three restaurants to “make the switch” from common, single-use petroleum-based plastics, such as straws and take-out containers, to compostable and biodegradable products in an effort to keep harmful plastics out of waterways.

“When you use a straw in a restaurant or throw away a plastic bag, there is a good chance it will end up in the ocean,” said researcher Helen Bailey, who studies dolphins and turtles at Chesapeake Biological Laboratory. “Rain and winds can wash the trash into local waterways that connect to the Chesapeake Bay and ultimately to the ocean, where animals like sea turtles and dolphins mistake plastic trash for food.”

Billions of pounds of plastic pollution enter the ocean every year. Large pieces of plastic, like bags and straws, can cause obstructions in the airways and digestive systems of these animals, leading to death. Small pieces of plastic, called “microplastics,” can accumulate in their stomachs and lead to starvation and sickness as they become unable to store food. Animals can even transfer toxic chemicals from the plastic to their body.

The Chesapeake Biological Laboratory is supplying paper straws to The Pier, Lotus Kitchen and CD Café along the Patuxent River waterfront. They will test out different types of paper straws to see which the public prefers, along with providing information to the public on straw use by posting posters with links to the online survey.

Using responses to an online public survey, researchers will evaluate the effectiveness and satisfaction level of these more environmentally friendly products and assess the public’s awareness of the impact of plastics on the environment. Randomly selected participants in our survey, along with the restaurant owners, will be able to participate in a research cruise on the Patuxent River, where scientists will sample microplastics from the water and observe some of the wildlife it is affecting.

Based on my own observations of beach trash, straws play a very small role. Bags and bottles are certainly a problem, and I'm shocked, shocked by the number of plastic tampon applicators that wind up on the beach. 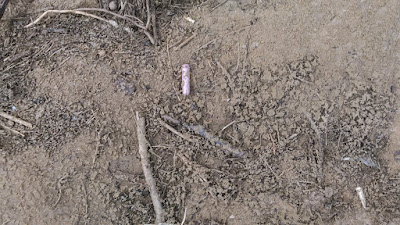