I intend it as something of a journal, but I hope that others may find value in its content. I may discuss science, fishing, music or politics, or I may post a picture from a walk on the beach. You are welcome to join in on the comments.

I think that's still more or less accurate, although with a little Rule 5 thrown in to spur the readership.

In a subsequent post the next day introduced the cast of characters: 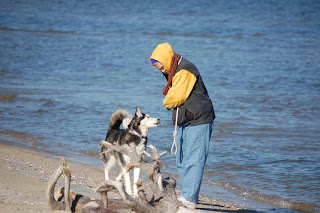 Georgia is a fellow scientist, and we work together on occasions. Skye is a Siberian Husky we rescued at the age of 3. Together, we walk the beach most weekend days. Georgia and I get exercise while hunting for fossils, beach glass and other artifacts, while Skye runs around a lot, tries to get strangers to give her a pet (she succeeds more often than not), and tries to catch whistle pigs in the kudzu (with rare success).

Georgia is still here, although we are both now retired. Weirdly, we still have a Siberian Husky named Skye, nearly identical to the first, who passed after a good life. This one never gets off the leash on the beach, though, because she's not nearly as trustworthy. 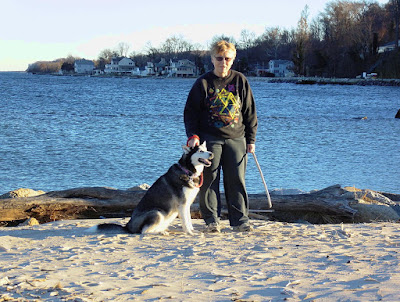 The blog is up to just shy of 6 million hits, not quite the million in the first year promised by Stacy McCain in his classic post, How to Get a Million Hits on Your Blog in Less Than a Year, but then, with the exception of Rule 5, I've not followed his advice religiously. Here is a graph of hits with time: 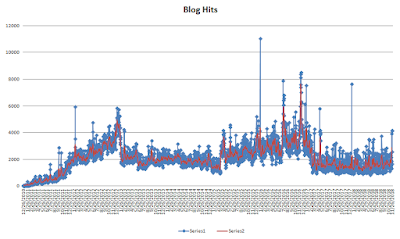 You can see two periods of growth, followed by a sudden drops to a new baseline. I suspect this has something to do with the way Google handled blogs. A fair number of these hits are probably robots, or crawlers, reading, saving, and preparing the data for google and other services. More than half the hits come from the US, but Germany, Russia, France, UK and Canada all get a pretty good number. Massive "hit storms" seem to mostly arise from Russia. Not shockingly, Rule 5 posts, account for all of the top 10 posts.

Any way, I suppose someday I'll have to give up the ghost, but I hope to persist until at least year 10. So until then, at least, stay tuned.