Tuesday's Gone with the Wind

Virginian's money, that is. The Frightful Cost of Virginia Offshore Wind by "Guest Blogger" (Steve Goreham) at Watts Up With That

On November 6, Virginia’s State Corporation Commission (SCC) regulatory agency approved a project to construct wind turbines near Virginia Beach. The plan calls for construction of turbines 27 miles off the coast, to begin operation by the end of 2020. Virginia electricity rate-payers will pay the exorbitant costs of this project.

The project, named Coastal Virginia Offshore Wind (CVOW), will be the first offshore wind project in the mid-Atlantic. Dominion Energy and Orsted A/S of Denmark will erect two 6-megawatt wind turbines supplied by Siemens Gamesa of Spain. The estimated project cost is a staggering $300 million, to be paid for in the electricity bills of Virginia businesses and households.

According to the Wind Technologies Market Report, US wind turbine market prices in 2016 were just under $1,000 per kilowatt, or about $6 million for a 6-megawatt turbine. Virginia will pay 25 times the US market price for the CVOW turbines. 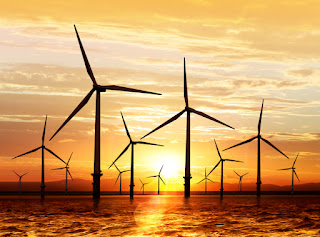 The SCC acknowledged that the project was not the result of competitive bidding, and that the project was not needed to improve power system reliability or capacity reserve margin. They also concluded “…it appears unlikely that the cost of offshore wind facilities will become competitive with solar or onshore wind options in the foreseeable future.” Virginia electricity rate payers will also pay for any project cost overruns.

Why would the State Corporation Commission approve such an expensive project? The SCC pointed out that on six separate occasions, the Virginia General Assembly declared that offshore wind was “in the public interest.” Governor Ralph Northam said the project would harness Virginia’s “offshore wind energy resource and the many important economic benefits that this industry will bring to our Commonwealth.”

What is it about green energy that induces government officials to pay far above market prices? It is doubtful that governor Northam or Virginia Assembly members would pay 25 times the market price for food, clothing, or housing. But they are quick to approve a project that will soak Virginia electricity rate payers.

Beyond the project cost, Virginians should be concerned that these wind turbines will likely not survive to the end of their projected 25-year life. The CVOW project is the southernmost proposed wind project along the Atlantic Coast and the site of periodic hurricane activity.

According to the National Oceanic and Atmospheric Administration, 34 hurricanes have been recorded within 100 miles of the project site within the last 150 years. Five of these storms were Category 3 hurricanes, including Hurricane Bob in 1991 and Hurricane Emily in 1993. A hurricane passes through the area about every five years.

Project specifications call for the CVOW wind turbines to survive sustained winds of 112 miles per hour (50 meters per second). The turbines are also designed to survive waves of 51 feet (15.6 meters) in height.

But it’s doubtful that these turbines will survive either the wind or waves of a major storm. According to the National Hurricane Center, Category 3 hurricanes exhibit sustained winds of 111 to 129 mph, stronger than the design limits. Category 1 hurricanes typically drive waves much higher than 50 feet. Hurricane Florence measured Category 1 wind speeds when it crossed the coast at Wrightsville Beach, North Carolina on September 14. But just two days before, wave heights of 83 feet were recorded on the northeast side of Florence.

Who speaks for the electricity rate payers of Virginia? It’s certainly not Governor Northam, the General Assembly, or Dominion Energy. Long after government officials leave office, Virginia citizens will be on the hook for an expensive offshore wind system that is unlikely to survive the turbulent weather of the Atlantic Ocean.

One Virginia turned firmly blue with the influx of DC area types, this sort of virtue signaling, unproductive project became inevitable. I'm sure, that as a federal taxpayer, I too will be be paying part of this bill since the wind projects must be heavily subsidized to sell the electricity they produce. But there are several good things about offshore wind power. First, the currents sweep away all the sea birds the rotating propellers with kill (the ones that the waiting sharks don't find). And while I'm sure that fishing under the turbines will be forbidden on security grounds, once the hurricanes start to topple them, there will be a steady supply of fresh structures.