Actually, some of this is from the day before the midterms, I didn't get around to putting one out yesterday, but like fine French cheese, it still stinks.

Why is (almost) nobody talking about Trump-Russia collusion? I'm ok either way, I just would like to know why it was the #1 most important story in the world for so long and now it's not.
— Sharyl Attkisson (@SharylAttkisson) November 5, 2018


Because it wasn't working they way they hoped? 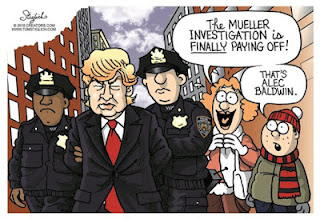 Chuck Ross at Da Caller looks ahead: Mueller Expected To Make Moves After Midterms — Here’s What He Could Do


Whether intentional or not, Robert Mueller has honored an unofficial Justice Department policy that limits major actions in political investigations 60 days before an election. But as Mueller and his team of prosecutors have worked behind the scenes on investigations of Trump associates, numerous clues about the probe have emerged through witnesses and attorneys who have shared insight from the investigation with reporters. The smoke signals have generated speculation that, if Mueller plans to issue indictments in his investigation, they will be handed down within days or weeks. There have also been reports that Mueller will submit a report on the investigation to the Justice Department by the end of the year.

If Mueller makes a major move in the near future, it will likely revolve around these areas of interest.

Roger Stone - Mueller is focused on what longtime Trump confidant Roger Stone knew about Wikileaks’ plans to release Democrats’ emails before the election, according to numerous witnesses involved in the special counsel’s probe. Mueller has interviewed or subpoenaed at least 11 Stone associates. Some have appeared before a grand jury that Mueller is using for the investigation.  . . .

Paul Manafort and Michael Cohen - Manafort and Cohen, both former Trump associates, had perhaps the strongest links to Russians of any other campaign advisers who have popped up in the collusion probe. Mueller is clearly interested in both men. They have entered plea agreements with the government and have met extensively with Mueller’s team. It is unclear whether they are providing information about possible collusion involving the Trump campaign or about other topics. . . .

Peter Smith - Mueller is also said to be investigating a GOP operative’s attempts during the campaign to track down the 33,000 emails that Hillary Clinton deleted from her private email server. The operative, Peter Smith, claimed to have tracked down foreign hackers who claimed they had obtained Clinton’s emails. He also claimed that Michael Flynn was part of the project. Clinton’s deleted emails were not released during or after the campaign, and there has been no indication that Smith was involved in searching for the emails hacked from the Democratic National Committee or Podesta. . . .

Michael Flynn - Flynn is scheduled to be sentenced in his case before the special counsel on Dec. 18. He pleaded guilty on Dec. 1, 2017, to lying to the FBI about his contacts in December 2016 with Russia’s ambassador, Sergey Kislyak. Very little has been released about Mueller’s interest in Flynn or about what information, if any, the retired lieutenant general has provided prosecutors. . . .

Trump Tower - Mueller has showed interest in the June 9, 2016, Trump Tower meeting in which Donald Trump Jr. hosted a group of Russians led by an attorney with links to the Kremlin.

Trump Jr. accepted the meeting after an acquaintance, Rob Goldstone, told him that a “Russian government attorney” wanted to provide the campaign with information about Hillary Clinton’s links to Russia. “If it is what you say I love it,” Trump Jr. responded.

Shockingly, this is the first I remember reading of Peter Smith, but most of this has been litigated in the press extensively, but of course, Mueller can be expected to invent such charges as "conspiracy to defraud the United States" on almost any act.


An attorney for Roger Stone testified on Friday before the grand jury being used in Special Counsel Robert Mueller’s investigation of Russian interference in the 2016 election, the lawyer told The Daily Caller News Foundation.

Nixon was cited in that story saying that he could provide information to Mueller’s grand jury that would back up Stone’s claim that he learned about WikiLeaks’ plans to release information on the Clinton campaign through Randy Credico, a left-wing comedian and radio host.

Stone, 66, told the House Intelligence Committee that Credico was his WikiLeaks contact. Credico has touted his links to Julian Assange and has interviewed the WikiLeaks founder on his radio show, but has denied being Stone’s conduit to WikiLeaks. He told CNN that he testified the same to Mueller’s grand jury on Sept. 7.


David Lugo, a filmmaker who interviewed Stone for a movie, told The Washington Post Tuesday that he has turned over hundreds of text messages, emails and Facebook messages to the grand jury. Lugo, who was a co-producer on the 2015 Oliver Stone film, "A Good American," also said he testified on Oct. 19 before the grand jury about conversations about WikiLeaks he had with a onetime friend of Stone, New York comedian Randy Credico.

Separately, attorney Tyler Nixon, another Stone associate, confirmed to The Post that he testified before the grand jury Friday.
. . .
Both Lugo and Nixon told The Post last month that Credico acknowledged in conversations being the source of material for Stone's statements and tweets about WikiLeaks.

Another Stone associate, conservative author Jerome Corsi, was interviewed by Mueller's team over three days last week and appears to be emerging as a key witness, according to a person familiar with the sessions who requested anonymity to describe the ongoing investigation. Stone has said that research by Corsi about Clinton campaign chief John Podesta and his lobbyist brother Tony prompted him to tweet "it will soon the Podesta's time in the barrel" on Aug. 21, 2016. The tweet came about six weeks before WikiLeaks began publishing emails hacked from John Podesta's account.

So it wraps around back to a Clinton associate? Interesting. It seems like everything does.
Posted by Fritz at 8:28 AM