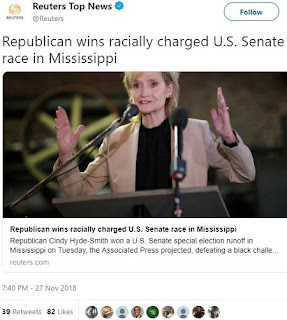 
When Democrats lose, the explanations are never surprising:


The Republican senator for Mississippi has been re-elected following a bitterly divisive runoff which evoked the state’s dark history of racist violence.
Cindy Hyde-Smith survived controversy caused by her racially charged comments to defeat Democrat Mike Espy, who had hoped to become the state’s first African-American senator for more than 130 years.
Ms Hyde-Smith, first appointed to the seat in April, had initially been comfortable favourite to win the race until footage emerged of her saying about a supporter at an 11 November rally: “If he invited me to a public hanging, I’d be on the front row.”

Sen. Hyde-Smith’s “public hanging” comment had nothing to do with race. The attempt by Democrats and the media (but I repeat myself) to turn this into something it wasn’t just goes to show how compulsively dishonest liberals are. They even manufacture racism as necessary:


A group of nooses discovered hanging off trees near the Mississippi state Capitol were not a warning from a white supremacist group, but rather a “protest” by leftists against Mississippi Republican Senate candidate Cindy Hyde-Smith.
Mainstream media organizations melted down on Monday after a number of nooses were found hanging in the vicinity of the capitol building, strung from trees as part of a “message” campaign — though the Associated Press, which first reported the story, didn’t give much more information about the “message” the nooses were trying to send, only that it was one of “hate.” . . .
Local news reported photos of the nooses, and, again, avoided printing the “messages” that were written on signs left near the ropes. . . .
Signs placed near the nooses but reported only as “hate” messages by the Associated Press and others, had plenty of information about who hung the nooses and why. But weirdly, the signs didn’t appear on anyone’s Twitter feed until late Monday evening, nearly 12 hours after news of the display went viral.
The signs indicated that the nooses were part of a protest by Democrats, warning against re-electing Hyde-Smith.

Unlike the liberal media, Mississippi voters aren’t stupid enough to be deceived by this obvious Democrat propaganda stunt. With 96% of precincts reporting last night, Hyde-Smith won 54%-46% over Espy.

When race is all you have going for you, race is what you use. Shepherd Smith's tears are delicious, if unexpectedly salty.
Posted by Fritz at 3:35 PM