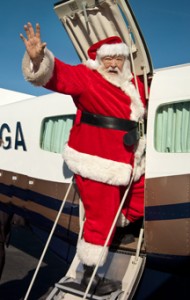 
50th Anniversary Tangier Island Christmas “Holly Run” To Take Place December 1st Stevensville, Maryland – On December 1, 2018, as they have been for 50 years, pilots from the Chesapeake Bay area will bring Christmas cheer to the approximately 600 isolated residents of Tangier Island, Virginia and Eye On Annapolis will be with them!

Eastern shore pilot Ed Nabb, Sr. started delivering holiday greens (holly) to the island in the 1960s when he realized that the rising sea level had eroded Tangier Island to the point that it no longer supported the growth of holly or other traditional Christmas evergreens.

His son, Ed Nabb Jr. took the reigns upon his father’s passing growing the event to nearly fifty pilots and planes carrying holly to the island. In recent years, Santa has joined the pilots to spread Christmas cheer.

The pilots this year are also bringing classroom supplies for the students and teachers at the Tangier Combined School. “Teachers on the island can’t just run out to Walmart like we can,” explained Chesapeake Sport Pilot Chief Flight Instructor and Holly Run coordinator Helen Woods. “Things that every teacher needs this time of year like Kleenex and Germ-X can be in short supply. We’ll be loading our planes with these and other items the school needs in addition to bags of holly.”

You do know the people on Tangier have boats and money, don't you?
Posted by Fritz at 12:33 PM