Russiagate is in a near lull as the midterms approach, but we get this little bit at Da Hill: Ken Starr: I haven't seen Trump commit anything 'close' to an impeachable offense

John Catsimatidis in an interview airing Sunday on AM 970 in New York asked Starr, who led the investigation into former President Clinton's sexual misconduct with Monica Lewinsky, if Trump had committed any "impeachable offenses."

"Not even close," Starr replied. "I know of no evidence … that would suggest that [Trump] has committed high crimes and misdemeanors."

"You can hate the way he tweets … you can disagree with his policies ... but be very careful before you move the country toward impeachment," he added. "It’s inherently divisive."

Starr has increasingly appeared on cable news shows over the past year to discuss special counsel Robert Mueller's investigation into ties between the Trump campaign and Russia.

The former independent counsel added that there was not a consensus over impeaching Clinton.

"Essentially, you need a consensus among ‘we the people' [for impeachment]," he said. "We the American people need to agree this president should go. We had that with Richard Nixon. We did not have it with Bill Clinton."

"We certainly don’t have it with Donald Trump," he said. "We have a nation divided, but a nation divided does not mean let’s get rid of the president."
. . .
Starr at another point in the interview on the Catsimatidis radio show reiterated that he trusts Mueller but feels wary of those around him.

"I see no indication of Bob Mueller being at cross purposes with anything at the Justice Department," Starr said. "What we do know is that there were some really bad apples … at the FBI. I’m really disappointed."

"That never happened in my experience with the FBI," he added.

The Obama administration politicized the DOJ and FBI. Part of the goal of the Russia investigation is to make it difficult for the Trump administration to clean house, by crying "Obstruction!" every time some malefactor gets pushed out. 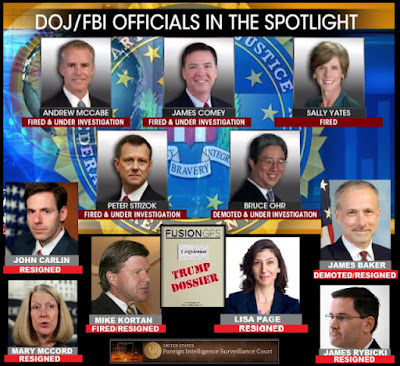