Russiagate: It Turns Out Lying to Congress is Illegal After All Who knew? Clearly not James Clapper, or John Brennan, James Comey or Hillary Clinton, all of whom got up before Congressional committees, took an oath to tell the truth, and clearly lied their asses off.  What about Susan Rice and Loretta Lynch and Andrew McCabe and Glenn Simpson? But now that it's convenient, Robert Mueller has extracted a confession from President Trump's ex attorney, Michael Cohen for lying to Congress. The lie appears to be for telling Congress that he and the President stopped working on a project for building a hotel in Moscow earlier than they actually did. Note that no hotel was built, or is currently under consideration. I can even imagine that Cohen and Trump has different views on when that decision was made.

At issue is a proposal to build a skyscraper bearing Trump's name in Moscow. Cohen told both the Senate and House intelligence panels the real estate project had ended before the political primary season began, according to a court document.

Trump told reporters outside the White House he had decided not to build the building in Moscow, although he did not specify when he decided against pursuing the project.


“It cannot be determined if Cohen’s cooperation will lead to other criminal allegations,” Coffey said. “But for most high-powered business people with complex business interests, having one’s personal attorney become a star witness for the prosecution is the worst possible legal nightmare.”

Yeah, we've heard that before. Politico: Mueller stalks Trump abroad — again. The Daily Mail: President cancels meeting with Putin and brands his former lawyer Michael Cohen 'weak' and a 'liar' after he puts him in legal firing line by pleading guilty to misleading Congress about controversial Trump Tower deal in Moscow. Now tell me again that this isn't harming the United States foreign policy.

The Hill breathless reports that Corsi says he ‘absolutely’ intended to help Trump campaign by trying to get Clinton emails. But that's not illegal. Jerome Corsi explains the perjury trap Mueller's team sprang on him, Thomas Lifson at the American Thinker


It is a harrowing tale as he tells it. If you believe him, he is a victim of a ruthless team that took possession of his computer, smartphone, and other records and then spent hours grilling him over details of his communications years earlier. When he failed to remember that he forwarded one email, they had him on a charge of lying, even though, as he told Tucker Carlson (rush transcript via Grabien):


Now the special counsel came in and blew up and they actually sent me home and gave me an opportunity to review the emails. When I came back, I amended the testimony to say that I now remember the email. The special counsel was happy with that until I couldn’t give them what they wanted. Which was a connection that I had with Assange, which they assumed I have come which I I didn’t have. Now suddenly, they forgot they allowed me to amend my testimony and they are going back to the mistake I made, when I forgot the emails. So really, I think, it is completely fraudulent, the charge that they were trying to get me to plead to. I refused to plead to a lie.

There should be written records of this offer to allow him to amend his testimony, subsequently deep-sixed. If the Mueller team has failed to keep such records, that would call into question the integrity of the entire operation.

And that is how we all can commit 3 Felonies a Day. Do we need a Special Prosecutor for the Special Counsel? But Ex-Watergate prosecutor: My legal opinion on Corsi is ‘liar, liar pants on fire’. Maybe, but the facts are out there somewhere.

The Manafort-Trump talks baffle legal community (The Hill). Then their not very imaginative, or being deliberately deceptive. I know where my money goes. Petterico, who I don't see much anymore that he's gone shriekingly Never-Trumper, The Strange Case of Paul Manafort’s Cooperation … with Donald Trump. Contrary to Alan Dershowitz's position, Brent Budowsky thinks a Manafort pardon would be impeachable, indictable and convictable. Since impeachable is in the eyes of the House, now in Democrat hands, that's probably true. But given the Senate needing a 2/3s vote, probably not convictable. It would be the end of the GOP and the start of a new party.


The push for the bill again shows how, to this point, Trump’s main threat to our constitutional system has been catalyzing a hysterical opposition. That opposition is so freaked out by the president that it is willing to throw overboard legal and constitutional niceties to thwart him.

Allahpundit: Jeffrey Toobin: It’s Not A Coincidence That All Of This Russiagate Activity Is Happening After Trump Submitted His Written Answers. Maybe, but everyone expected a surge of activity after the midterms. I think Mueller was waiting out the midterms, too. But did Mueller hope to spring a perjury trap on the President? Probably. Ed Morrissey: Trump: You’d Better Believe Rod Rosenstein Belongs In Jail. See the image in the first paragraph, that Donald re-Tweeted.


Is Rosenstein about to get fired … again? Maybe, although this sounds more like presidential venting than anything like a plan. If Trump fired Rosenstein with Whitaker still in place as acting AG, he might face a barrage of criticism even from Senate Republicans, who were making noises about passing a protect-Mueller bill this week. That would leap to the top of the agenda in the wake of a Rosenstein departure. But the biggest problem is that it’s just far too late to fire Rosenstein over Mueller. The time to do that was 18 months ago, not last September or now.

Why Trump will look back fondly on the Mueller probe by John Podhoretz, NyPo


Yes, liberals remain hopeful that special counsel Robert Mueller will descend from the heavens and smite Trump with his terrible, if far from swift, sword. But they need not despair if, as I suspect, Mueller never does deliver the knockout blow against the Trump presidency for which they have been longing.

Indeed, they may forget Mueller entirely once the new House is sworn in. Instead of one avenging hero, they may have 22 new avenging heroes — leaders of the House who know their paths to national fame and partisan fortune will require them to ululate their battle cries and conduct a multi-front assault on the Trump administration.

Myself, I've never been impressed with effectiveness of Congressional committees. And I consider that a feature, not a bug.

Also at NyPo: Trump threatens to declassify ‘devastating’ docs about Democrats. As well he should. But Sundance at CTH claims he's holding out playing that card for when it's best played. President Trump Discusses His Decision Not to Declassify “Spygate” Documents…


I think much of our angst is because we look too short-term; and the media does a great job of convincing us President Trump is selfish.  Perhaps they are correct. Perhaps I’m wrong; but I see this leverage issue as something Trump views as important – obviously; or he wouldn’t approach it that way.

Yeah. He would. Without question.

And he wouldn’t care if it meant he could never win in 2020.He ain’t a politician.

Fine, but don't hold out until after the game is over. Mark Meadows plans ‘Investigations – My Plan to Counter’: A Trump Ally's Secret Plan to Fight House Democrats (via Bloomberg).


So, pretty much acting like a Democrat when the shoe is on the other foot.

NyT (at MSN, where it's readable): Federal Employees Are Warned Not to Discuss Trump ‘Resistance’ at Work. They're basically being warned to obey the 11th Commandment: "Don't Get Caught." 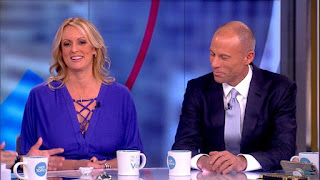 
He's referring to this story, and not really offering any defense, except to say "reserve judgment."


Stormy Daniels and her husband have been accused of threatening a couple who helped manage the adult film star's online store, and the men have filed a police report claiming they now fear for their safety.
Keith Munyan and J.D. Barrale are longtime partners and friends of Daniels. She once rented a home from Munyan, and has publicly referred to them as her "Gay Dads." The two men just filed a police report with the Santa Barbara County Sheriff's Office. 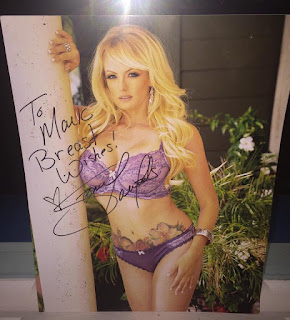 Things took a drastic turn Wednesday afternoon, when the men claimed to receive a text message from Daniels' estranged husband, Glen Crain. We’re told she recently reconnected with Crain, as they share a daughter together.
In a text message provided to The Blast, Crain appears to aggressively threaten Munyan and Barrale that they "fucked with my daughters' money, which means you've now fucked with me."
He then allegedly drops a homophobic slur directed at the men, appearing to write, "Rest assured I will get that 25,000 back that you two FA**OTS decided to keep to spite Stormy." 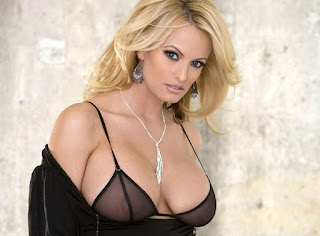 Crain then appears to promise, "I WILL FIND YOU," adding, "YOU WILL BE DEALING WITH ME."
We're told the two men interpreted the text message as a threat on their lives, and they went to file a police report against Crain and Daniels, as he was acting as her representative.

The story goes on to say that the police say the "threats" are not thought to "rise to the level" of true criminal threats, though they're continuing to investigate.

Here's some irony: Stormy Daniels claimed that Trump defamed her when he said, jokingly, that the sketch of the man she alleged warned her to keep away from Trump looked like her (ex) husband.

Well, according to the police sketch, he did.

Wombat-socho has Rule 5 Sunday: Happy Hanukkah! and FMJRA 2.0: A Smooth Jazz Interlude up on time and within budget.
Posted by Fritz at 9:40 AM