Do I have to? Well, I guess I might as well clear out the bin. First, Adam Mill at the Federalist expounds on how Obvious Double Standard On Recusals Proves Russia Probe Is About Getting Trump

The installation of Matthew Whitaker as the acting attorney general has the recusal pundits barking like shelter dogs in the presence of a trespassing squirrel. In case you’re wondering how the recusal rules work, it’s simply a matter of whether it helps or hurts Trump.

Don’t believe me? See if you can detect a pattern. Since Whitaker might rein in the special counsel, he must be recused, they argue. Similarly, when it appeared former attorney general Jeff Sessions might help Trump, he acceded to demands he recuse himself. But Deputy Attorney General Rod Rosenstein is a proven thorn in the president’s side with an obvious conflict of interest, so no demands for recusal there. . . .


“You can see it in Trump’s body language all week long. There’s something troubling him. It’s not just a couple staff screw-ups with Melania,” said a senior Republican official in touch with the White House. “It led me to believe the walls are closing in and they’ve been notified by counsel of some actions about to happen. Folks are preparing for the worst.”

More from Paul Waldman at WaPo, Trump’s battle to destroy the Mueller investigation is officially doomed


The president himself might not quite realize it yet, and he probably doesn’t understand why it happened. But he has lost that conflict, and the reason is simple: His attempts to fight Mueller were so ham-handed and so public that it made it impossible for him and his administration to shut Mueller down.

And never-Trumper AllahPundit at Hot Air: Trump: I’m Answering Mueller’s Written Questions Myself, Not With Any Lawyer’s Help "President Trump on written questions from Robert Mueller: "My lawyers don't write answers. I write answers. I was asked a series of questions. I've answered them very easily."


Sen. James Lankford (R-Okla.) said Trump’s pick would have to assure lawmakers on both sides of the aisle that Mueller would be able to continue unimpeded.

“It would be helpful to start moving … so we can have that person in place as soon as possible,” Lankford said. “Whoever is going to be there would have to make clear statements about what they intend to do on the special counsel. The sooner the better. Let’s get it resolved."


House Judiciary Committee Chairman Robert Goodlatte, R-Va., has notified colleagues that he will subpoena Comey for a closed-door deposition Nov. 29 and Lynch for Dec. 5, according to a person familiar with the subpoenas. The person declined to be identified because the person was not authorized to speak publicly on the matter.

The subpoenas are part of an investigation by two GOP-led committees into decisions made by the department during the 2016 election, when Democrat Hillary Clinton was cleared in a probe into her email use and Justice officials launched an investigation into Trump's campaign and Russia. Both Comey and Lynch were in power during that time.

Republicans on the House Judiciary and Oversight and Government Reform panels have argued that Justice officials were conspiring against Trump's election, and they have interviewed multiple current and former Justice officials behind closed doors in an effort to prove their case.

It's unclear if Comey and Lynch will appear, or if Republicans would be able to enforce the subpoenas, since they lose the House majority in January. Goodlatte and the chairman of the Oversight panel, Rep. Trey Gowdy of South Carolina, are both retiring.

I can't imagine why they might not want to appear and tell their side of the story. 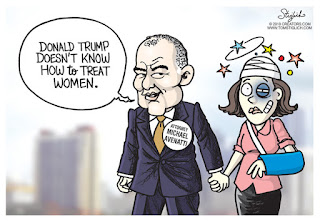 Instapundit: IF YOUR SCHADENFREUDE LASTS MORE THAN FOUR HOURS, SAVOR IT: Michael Avenatti’s law practice evicted from offices. And all his "friends" start to desert him. Salon: Michael Avenatti Never Should’ve Been a Resistance Hero. AllahPundit: Michael Avenatti On Domestic Violence Story: TMZ Should Get Ready To Open Up Its Checkbook. Why can't they both lose?

Politico: Assange charges could unsettle liberals, conservatives — and Trump Free speech is so over with. Not quite Russiagate, but I can't resist, from the Volokh Report, American Civil Liberties Union, RIP - The ACLU no longer even pretends to believe in civil liberties.
Posted by Fritz at 1:37 PM