Did a Meteorite Strike Destroy Sodom and Gomorrah?

According to Newsweek, Biblical City of Sodom Was Blasted to Smithereens by a Massive Asteroid Explosion


An asteroid that burst in a searing aerial explosion may have destroyed the Bronze Age city of Tall el-Hammam 3,700 years ago, archaeologists reported Saturday.

The city, which lies in the Middle Ghor region of the Jordan Valley, is considered a plausible site for the biblical city of Sodom by some researchers. But this conclusion is hotly debated within the field.

The cities of Sodom and Gomorrah were destroyed by God for their sinful behavior, according to the Christian Bible. 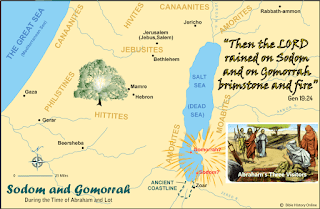 And so far, he hasn't messed with San Francisco.

Scientists presented their preliminary findings at the annual meeting of the American Schools of Oriental Research in Denver, Colorado.

Excavations and radiocarbon dating at Tall el-Hammam suggested most of its mud-brick walls vanished about 3,700 years ago. It’s thought that several Middle Ghor sites were inhabited for 2,500 years or more before the proposed impact. 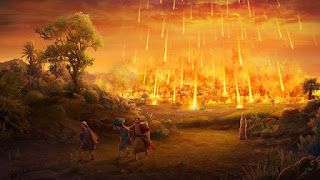 
Minerals that suddenly crystallized in blistering heat support the concept, archaeologist Phillip Silvia, of Christian institution Trinity Southwest University in Albuquerque, told the conference. Silvia and his colleagues have been excavating the city for more than a decade, Science Newsstated.

The enormous blast “not only [wiped] out 100% of the Middle Bronze Age cities and towns, but also [stripped] agricultural soils from once-fertile fields,” researchers wrote in an abstract. Shockwaves may have pushed super hot briney water from the Dead Sea over the east of the Middle Ghor, they added.

And the brine could account for Lot's wife. Well, other than not really knowing where Sodom and Gomorrah were located, and whether or not a meteorite or asteroid really exploded overhead there, it sounds plausible.
Posted by Fritz at 7:46 PM