Femen Protests Trump the Only Way They Know How


#FEMEN faces #TRUMP car on the Champs Elysées in Paris to denounce this gangster party, faking to celebrate peace and end of WW1. #FEMEN believes that restoring world peace with those who are responsible for the ongoing wars is hypocritical. pic.twitter.com/9LfHNM3uJf
— FEMEN (@Femen_France) November 11, 2018


Trump's motorcade briefly paused due to the breach of security before continuing on to the Arc de Triomphe where around 70 world leaders had gathered to mark the centenary of the Armistice.

Three Femen protesters had already demonstrated at the Arc De Triomphe on Saturday morning to denounce the presence of "war criminals" among the guests at the ceremony.

The three were also arrested. 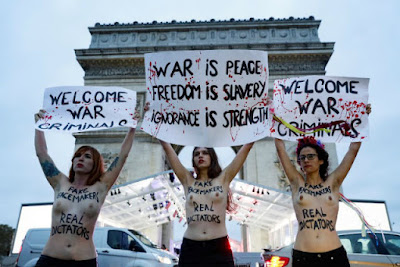 
As I often say is response to Femen's protests, whatever Trump is doing, he should stay the course. Keep the protests alive!

Wombat-socho is back in the saddle again, with Late Night With Rule 5 Sunday: Pepper Potts.
Posted by Fritz at 3:08 PM