Floron du Jour: "Wait Just a Minute, While I Interview for a Job, Dad" 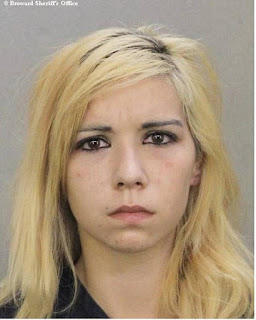 Chelsea Wilson was arrested Friday morning after she allegedly robbed a TD Bank in Fort Lauderdale on Thursday afternoon.

Police said Wilson’s father told them he drove her to the bank because she told him she was going to a job interview, according to the Florida Sun-Sentinel.

Sometime between leaving the car and going to the “job interview,” the 24-year-old suspect covered her blonde locks with a red wig and hat and put on sunglasses, according to a complaint obtained by Local10.com. 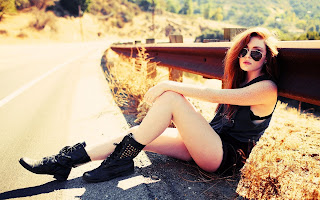 Now go out and get yourself some big black frames
With the glass so dark they won't even know your name
And the choice is up to you cause they come in two classes
Rhinestone shades or cheap sunglasses
Oh yeah, oh yeah, oh yeah


“You have exactly one minute to give me all your $50 & $100 bills from both your drawers or I will shoot you! No dye packs, no alarms follow these instructions and no one will get hurt, act normal.”

Wilson made off with $300 and exited the bank parking lot in an SUV that FBI agents later determined was registered to her father. Wilson’s father said he thought the cash his daughter had was an advance, according to authorities.

I'm not quite sure who is the Floron here, Chelsea or her dad. Maybe both. Wombat-socho has "Rule 5 Sunday: Wonder Girls And Indians" up in time and under budget at The Other McCain.
Posted by Fritz at 3:21 PM