Irony of the Day Clinton lawyer may have exposed entire server to China; Lenovo laptop used by Heather Samuelson to review Clinton emails may have had Chinese malware preinstalled but a word from Hillary Clinton on the importance of government cybersecurity


During the Cold War, the Russians mastered the use of slow-acting poisons to kill victims long after they were stabbed with an umbrella tip. Fittingly, the WikiLeaks emails may act like ricin or anthrax, wreaking havoc on Clinton's presidency long after they're released. In a normal election year with a normal GOP nominee, the WikiLeaks revelations might prove fatal to Clinton's candidacy. Instead, it seems almost a sure thing that they will poison Clinton's presidency for years to come. The allegations of pay-for-play between her foundation and the State Department, her speeches to Wall Street, the animosity of some of her closest advisors for Catholics: All of these things will have a long half-life. As will her manifest lies about the use of her private server. 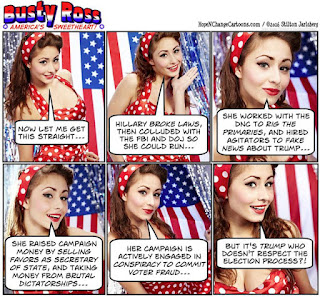 Wikileaks could have a lasting impact on Hillary Clinton I dunno, it's hard to imagine her reputation for honesty getting much worse.

Hillary's team claimed there are "open source" news articles "discussing" this, though those would of course be speculation in the press, not confirmation from someone in a position to know the actual fact of the matter.

James O’Keefe Files FEC Suit Against Hillary Clinton. Good luck with that. The FEC is an explicitly political body, deliberately split 3-3 Democrats and Republicans. The Democrats on the commission have been trying to curtail free speech in elections for years.

Clinton’s Press Secretary Claims Benghazi Mother Is Lying. Only two people know what was said in that conversation, and one of them is a well known liar.


The multi-million dollar Clinton Foundation donor was denied entry into the U.S. last year because of his ties to a Lebanese organization that has allegedly given money to the terrorist group Hezbollah, The LA Times reports.

The news, which was based on interviews and government documents, comes weeks after emails surfaced showing that in 2009, a Clinton Foundation adviser asked Hillary Clinton’s State Department deputy chief of staff, Huma Abedin, for a favor on Chagoury’s behalf.

I'm only surprised he was denied entry. Huma on Hillary’s $12M Morocco fiasco: ‘She created this mess and she knows it’. It would be a shame if foreign billionaires dictated our government. Soros Gives $61 Million to Media Groups Promoting Clinton's Liberal Agenda. The Obama-Clinton banana republic. At least we'd get bananas.

Oprah says ‘You don’t have to like her', or as Instapundit notes: YOU DON’T HAVE TO FALL IN LOVE, YOU JUST HAVE TO FALL IN LINE. The Wrap asks the important question "Is Madonna’s ‘Oral Sex for Hillary Votes’ Offer Even Legal?"

“It is generally illegal to exchange anything of value for [a] vote,” Judith Ingram of the Federal Election Commission told TheWrap.

Which brings us to the question of whether her offer has any value. Another dribble from Wikileaks: Hillary Clinton Secretly Enlisted Feminist Writer Jessica Valenti to Carry Her Water in Branding Bernie Sanders as "Anti-Woman". As Ace notes "When you have to keep something secret, that's a pretty good sign it's unethical." Real feminists don't airbrush Hillary Clinton's flaws. Sadly, though, they mostly do.
Posted by Fritz at 10:41 AM