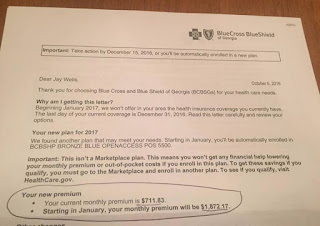 There's been a lot of water under the Obamacare bridge since the last time I summarized.

Well, it's official, on average, Obamacare policies are going up 25% on average: Obamacare premiums to go up by double digits, Confirmed: Obamacare premiums going up an average of 25% in 2017, And that's just average, Obamacare Premiums Up 30% In TX, MS, KS; 50% In IL, AZ, PA; 93% In NM: When Does The Death Spiral Blow Up? But Arizona wins the 2017 ObamaCare sweepstakes: 116% increase in benchmark premium. Steve Wynn: Printing Money Degrades Living Standard, Causes Anger; Healthcare Goes Up, Product Doesn't Get Better. For Pennsylvania Open Enrollment In Affordable Care Marketplace Will Bring Unpleasant Changes To Consumers. Mary Katherine Ham explains how her Defective Obamacare Health Insurance Product Just Blew Up, with a 96% premium increase to the cost of a small house mortgage.

But now: ‘I Had Nothing to Do With That!’ Obama Dodges Blame For Skyrocketing Premiums and compared Obamacare to a Sumsung Galaxy S7, catches fire but is still better than a rotary phone. ObamaCare is like a defective cellphone, or something. Which could be true if it's not your house that catches fire.

And it's not just premiums. Obamacare is insuring far less people than was promised: Obamacare Exchanges -- Enrollment Is Depressed by Their High Cost & Poor Value | National Review. Aetna CEO: Young people pick beer over Obamacare. At least you get a buzz with a beer. For a healthy young person, you get nothing but a bill for Obamacare, between premiums and high deductibles. Health Law Tax Penalty? I’ll Take It, Millions Say

And with the plans not making money even with ridiculous premiums, insurers and provider continue to flee the program: Obamacare Premiums Skyrocket as Insurers Flee the Program. AP Analysis: Obamacare consumers face fewer choices next year. What if your Obamacare insurer has left the business? Chicago Hopenchange: Major hospitals bail on ObamaCare for 2017.

Obamacare and the Prognosticators


Many conservatives are rightly feeling vindicated by the rolling failures of Obamacare this year. The economic logic of the exchanges is proving untenable in a way that many predicted when the Democrats set the country on this path. And some of the particular problems behind the failures, perhaps especially the way in which the system’s requirement for fairly comprehensive coverage has made insurance less attractive to the consumers it wants most, were evident before this all began. But it’s important to also see what hasn’t turned out as anyone quite expected, especially as it would helpfully moderate expectations about what people on all sides are predicting now. . .

The law of unintended consequences will not be denied.

(Most) Liberals are still holding out: CNN - Obamacare: Sick - but not in death spiral. Jonathan Gruber: Obamacare is ‘working as designed’, well yes, designed to destroy the American health care system. Grey Lady Worried on Obamacare, well, they do have a lot of emotional investment. Why Obama Won’t Listen to Reason on Obamacare. Does he listen to reason on anything else? When Will Liberals Answer For Obamacare’s Failures? Never. Obama Blames Media on Obamacare Failures. Well, obviously, they passed the law without reading or understanding it.  Colbert Mercilessly Mocks Obamacare. Of course, he thinks it didn't go far enough.

What about the politics of this? Harvard poll: Majority says ObamaCare faring poorly — even before WH acknowledged steep premium hikes, ObamaCare premium hikes fuel Trump, GOP case in key swing states Did your health care plan go up by 25% or more? Blame the democrats; they voted for it, exclusively. ObamaCare hikes leave Dems exposed They had clothes? I didn't see . . . GOP rebuffs Obama's entreaties to fix health law. Yeah, it's not their fault; none of it. If you want their cooperation, you need to compromise. I don't see that happening. Next prez has to plug health care holes. You mean fix the democrats mistakes?  Will the Fight for Obamacare Be Less Bitter Without Obama? I doubt it.Evidence? Hillary Clinton Hints at a Health Care Takeover to Keep Obamacare Alive. It was always the liberal plan. Break insurance, and use that as an excuse to take control of it.
Posted by Fritz at 5:43 PM