Some Rule 5 News for Sunday

I find myself in an unusual situation, a plethora of odd news that can be turned into Rule 5 news. First, Mexican millionairess Salma Hayek accuses Donald Trump of taking revenge on her for denying him a date:  I Denied Trump A Date, So He Planted A National Enquirer Story About My Height 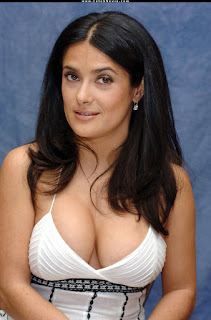 On a Spanish-language radio show, the Clinton-supporting actor said Trump befriended her boyfriend to get her number, but when she denied his offer to go on a date, he had a story planted in the National Enquirer that he wouldn’t date her because she’s too short.
. . .
“When I told him I wouldn’t go out with him even if I didn’t have a boyfriend, [which he took as disrespectful], he called — well, he wouldn’t say he called, but someone told the National Enquirer,” Hayek continued, adding that she never went out with him.

“Later, he called and left me a message. ‘Can you believe this? Who would say this? I don’t want people to think this about you,’” she said. “He thought that I would try to go out with him so people wouldn’t think that’s why he wouldn’t go out with me.”

So she has no evidence, and he's already denied it, and it seems to have taken place many years ago, since there's no mention of Melania. For whatever it's worth, Salma, I don't think Salma you're too short.


And finally, a sad day, as chiropracty kills a cutie: Coroner's report suggests model's death was caused by chiropractor


A report from the Los Angeles Coroner's Office suggests that a stroke that killed a model may have been caused by a visit chiropractor, NBC's Today show reports.

Katie May, a Playboy model with a devoted following on social media, especially Snapchat, died on Feb. 4 after suffering a stroke.

NBC reports that the Los Angeles Coroner's Office released a report Wednesday that stated specifically that the 34-year-old's death was caused by "neck manipulation by chiropractor" that triggered the stroke.

May had tweeted about neck pain the week before her death:

Pinched a nerve in my neck on a Photoshoot and got adjusted this morning. It really hurts! Any home remedy suggestions loves? XOXO
— Katie May (@Ms_katiemay) January 29, 2016

Almost any injury can touch off a clot, which could lead to a stroke.

Linked at Pirate's Cove in the weekly "Sorta Blogless Sunday Pinup" and links (sort of, I give credit for good intentions).