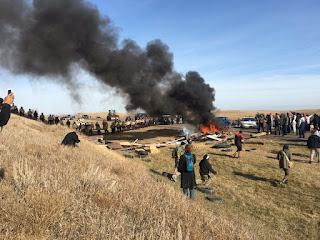 A man was shot in the hand after being “run off the road by protestors,” according to state Department of Emergency Services spokeswoman Cecily Fong, who noted that the victim also was armed. A protester was taken into custody, the Morton County Sheriff’s Department said in a statement. 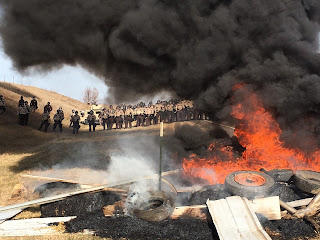 In this HuffPo post, protesters claim the man fired on was a pipeline company employee and an armed "instagator." Protesters also burned his vehicle.


In a separate incident, a woman was arrested after firing three shots that almost hit a deputy, Fong said. As darkness fell, more than 100 protesters had been arrested.

“We do believe there are people down there that are peaceful and prayerful but we’ve also known from the beginning that there are some bad actors,” Fong said, referring to the hundreds of Native Americans and activists who’ve camped in protest of the oil pipeline for months. “The last thing we want is for anybody to get hurt.”

The violence erupted Thursday morning, when law enforcement began removing Native Americans and environmental activists from a protest camp they built on private land.  The site, known as Cannonball Ranch, will be used by Energy Transfer Partners for its 1,172-mile pipeline.

There is another camp on federal land, which the authorities seem to be in no hurry to clear.

Also today, arrest warrants were issued for two protesters who threatened journalists and trapped them in their car until police arrived:


Authorities say the Oct. 18 attack on the journalists involved protesters taking a reporter’s microphone, blocking a vehicle in which the journalists locked themselves, and shaking and hitting the vehicle. Law officers eventually rescued the journalists after they called 911.

That incident involved Phelim McAleer and Magdalena Segieda, creators of the documentary film FrackNation. They published video of the incident online last week. . .

Now imagine the Federal government's response if the Malheur protestors had behaved in a similar way.
Posted by Fritz at 11:51 PM