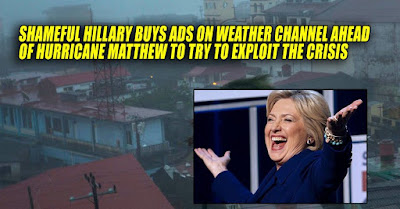 Hillary Blames Hurricane Matthew on "Climate Change". Hurricanes have been forming and striking North America's East Coast for thousands of years. She's correct, though, in the trivial sense that all weather is the result of previous history, and current inputs. Trying to make a silk purse out of a sow's ear, Hillary bets big on ads on the Weather Channel during the storm coverage, is taken to task for the obvious opportunism, and "delays" the ads. Hillary also used the storm as an excuse to ask for more time to register dead people and illegal aliens to vote in Florida. She was turned down by Gov. Scott, who said:


“I’m not going to extend it,” . . . “Everybody has had a lot of time to register. On top of that, we have lots of opportunities to vote: early voting, absentee voting, Election Day. So I don’t intend to make any changes.”

A reminder of the FBI double standards on prosecutions of politicians. According to the WSJ, The FBI Treated Clinton With Kid Gloves


Tim Kaine repeatedly defended Hillary Clinton’s use of a private email server during Tuesday night’s vice-presidential debate. “The FBI did an investigation,” he said at one point, “and they concluded that there was no reasonable prosecutor who would take it further.” But such a statement is credible only if it follows a real criminal investigation—that is, the sort of investigation that the FBI and the Justice Department conduct when they actually care about a case and want convictions.

We know all too well what that kind of investigation looks like, as two of the lawyers who defended a recent target: former Virginia Gov. Bob McDonnell. That story had a happy ending for the governor and his wife. The Supreme Court unanimously ruled in their favor this summer and all charges were dropped in September. But their victory certainly wasn’t due to lack of investigatory zeal on the part of the FBI and Justice Department.

The Conservative Tribune reports that Ed Klein claims to have a witness to the Stunning Order Bill Clinton Gave At Airport When Lynch’s Plane Came In. White House Coordinated on Clinton Email Issues, New Documents Show. I would have expected nothing less. Hillary Clinton .... and, Russian intelligence .... she is ripe for military exploitation ....


put simply, the russians know about her health. and, understand her deathly pallor. they will run her ragged ass from pillory to post, and put her to bed, and savage her as they have savaged the feminine obama.

It would be amusing to watch, if it weren't so critical to our defense. NEW EMAIL REVEALS: Clinton Aide Huma Abedin Launched Unprecedented Attack on Jewish Group. Now there is some great optics, a Pakistani born Saudi/raised Muslim attacking the Jews. Elliott Abrams notes the lack of historical depth of the new class of Clinton co-conspirators: Hillary, the Blogger, and the Singer Dude.


A hacker believed to be operating on behalf of the Russian government has released thousands of emails taken from the personal account of Capricia Penavic Marshall, a key Clintonworld figure who worked under Hillary Clinton at the State Department.

The emails, which were released on the anonymously-operated site DC Leaks, are broken down into eight categories: “Atlantic Council,” “Clinton Foundation,” “Conversations with Clinton’s team,” “favor,” “fundraising,” and several others.

Another Clinton aide whose account was hacked noted that


her campaign requested that SUVs provided to them be equipped with a “little step that comes down” to make it “easier to get out.” 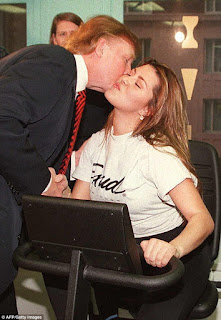 It's easier to answer when you get to write the questions: Leaked memo shows Clinton was provided questions ahead of interview. It's just makes more sense if you think of them as all DNC employees. Ingraham's Debate Advice for Trump: 'Moderators Are There to Ensure You Lose'. ‘Empire’ Cast Votes For Hillary Clinton In Lee Daniels-Directed Ad

No Mas! Former Miss Universe says she's done giving interviews about 'fat-shaming' after life story unravels: 'We will not be discussing the Trump subject any further' Or to misquote Oliver Hardy: "This is another fine mess you got me in, Hillary." Or as Chief Joseph may have said  "From where the sun now stands, I will fight no more forever."


Thornhill's suit alleges that Walden tells students they will complete a dissertation in 18 months and incur $70,000 in fees, when the time to complete the dissertation is much longer and the debt accrued much larger.

"Students who believed they were getting ever closer to obtaining their doctoral degree," alleges the suit, "were in fact stuck with decreasing resources, high faculty turnover, disorganization and a lack of oversight, all of which increased the length of the doctoral students' enrollments at Walden."

Hey, somebody had to pay the $17.6 million they paid to Bill to be "Honorary Chancellor", and it ain't gonna be the administration.

KAINE: President Bush said we would leave Iraq at the end of 2011. And Iraq didn’t want our troops to stay, and they wouldn’t give us the protection for our troops. And guess what? If a nation where our troops are serving does not want us to stay, we’re not going to stay without their protection.

That’s a nonsense answer — as amply demonstrated by the fact that we’ve sent back over 5,000 troops to Iraq without getting a formal agreement for protection from local prosecution. Obama found it necessary to return to the battlefield that he’d abandoned, and suddenly that lack of formal agreement was no longer an obstacle, opting instead for a diplomatic memo that Obama had found insufficient in 2011. That redeployment completely negates the Kaine-Clinton argument.

To correct for Kessler's pro-democrat bias, you must add two Pinocchios to fact checks regarding Democrats, and subtract two for fact checks on Republicans.

Hillary’s Hired Thugs - You want to know why she’s called Bruno? A record of personal violence and hiring thugs to intimidate Bill's other women.

Wombat-socho has "Rule 5 Tuesday: Birthday Edition" and "FMJRA 2.0: Function Creep" up at The Other McCain.
Posted by Fritz at 10:04 AM