Just What is a Urban National Marine Sanctuary? 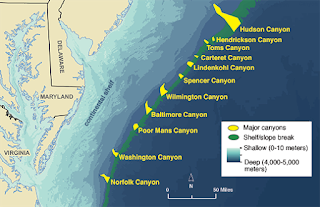 The National Aquarium in Baltimore is trying to have the Baltimore Canyon declared the US's first Urban Nation Marine Sanctuary. What does that mean?

The National Aquarium on Monday announced it is seeking the public’s support in its effort to nominate the Baltimore Canyon off the coast of Ocean City as the nation’s first Urban National Marine Sanctuary.

The Baltimore Canyon, a 28-mile long and five-mile wide submarine canyon off the coast of Ocean City lies at the center of the resort’s multi-million dollar fishing industry and contains fragile deep sea corals rarely seen anywhere in the world along with habitat for countless species of marine life. The National Aquarium has launched a petition drive to have it designated as the nation’s first Urban National Marine Sanctuary, presenting a unique opportunity to connect an urban population to the ecological treasure using cutting edge deep sea exploration technology.

That sounds like gibberish. What are you going to do bus Baltimore residents out to the canyon, so they can gaze on open ocean without much distinguishing features? All the action takes place below the surface.


“The Baltimore Canyon is not only a fascinating ecosystem, but also a natural classroom and living laboratory that we can use to expose our children to a new world, our next frontier,” said National Aquarium Chief Conservation Officer Kris Hoellen. “We hope that with a groundswell of support from our community, we can designate this untapped aquatic treasure as our nation’s first Urban National Marine Sanctuary. It is time to invest in our deep seas and in Baltimore.”

The actual Baltimore Canyon is 50 mile out to sea, and, in any event, is closer to Delaware than  Baltimore City.

The National Aquarium is in the first states of the designation process with the National Oceanic and Atmospheric Administration (NOAA) Office of Marine Sanctuaries. The first step is the petition drive to gain public support for the designation although the process could take as long as three years. If NOAA deems the Baltimore Canyon worthy of the designation, other steps would include an environmental impact assessment after which a series of public hearings would be conducted.

What would it mean for the canyon itself?


While a national marine sanctuary designation for the Baltimore Canyon could limit or prohibit some activities, it is not expected to curtail recreational fishing, which is vastly important to the resort’s economy. According to the petition released on Monday, not only would fishing not be prohibited, but would be encouraged if the Baltimore Canyon received the designation.

I note they carefully said recreational fishing, not commercial fishing. The canyons are noted as gamefish hot spots, for billfish and tuna.


. . . While the potential designation of the Baltimore Canyon as an Urban National Marine Sanctuary on the surface does not appear to impact fishing and other recreational uses, it would prohibit offshore drilling for oil and natural gas. The federal government had included a vast section of ocean off the mid-Atlantic coast as a potential lease area for private sector offshore drilling, but backed off that proposal last year. However, the mid-Atlantic does remain a potential area for controversial offshore seismic testing for oil and gas reserves. In addition, it is uncertain at this point what a designation would mean for the future offshore wind farm off the resort coast.

Probably not the best area for wind power, but I wouldn't mind if it were banned. I would be surprised if oil exploration were allowed on the Atlantic coast in my lifetime.


While an Urban National Marine Sanctuary designation for the Baltimore Canyon does not appear to impact fishing and other recreational uses, it certainly bears monitoring. Earlier this fall, the Obama administration designated a vast area the size of Connecticut off the coast of Cape Cod as the Northeast Canyons and Seamounts Marine National Monument, the first of its kind in the Atlantic. Marine National Monuments are far more restrictive than national marine sanctuaries. The long-range plan is to phase out all commercial fishing in the marine national monument off the coast of Cape Cod although recreational fishing will still be allowed.

I would expect similar regulations a few years down the road.
Posted by Fritz at 8:09 PM