Another Banner Day at Clinton.com

Another yuge day of news and opinions, thanks to the FBI Director Comey's announcement to Congress that he was looking into further emails from the Clinton.com server because FBI agents found such emails on a computer owned jointly by Anthony Weiner and Huma Abedin, as a result of a probe into Weiner's alleged sexting with a 15 year old girl.

So what's new in terms of actual facts or actions. We found out that the emails were discovered 3 weeks ago in the course of the Weiner inquiry. It is reported that some 600,000 emails were found, of which some tens of thousands show metadata that suggests origins in the Clinton email system in a file labeled "life insurance". Hmmm. We found out, in the course of yesterday that the FBI needed a warrant to look into the suspect email because they were found in a probe not related to the Clinton emails. If Clinton wants those emails released she should ask why Comey doesn’t have a warrant yet/ Orin Kerr of the Volokh Conspiracy explains the legal problem: Was it legal for the FBI to expand the Weiner email search to target Hillary Clinton’s emails? By the end of the day, multiple sources were reporting that the FBI had obtained the required warrant. We found out that the FBI had an investigation into corruption at the Clinton Foundations, and that the Poobahs in the DOj tried hard to squelch it which has the FBI and DOJ Feuding Over Hillary Clinton Probe. Family feud: FBI, DoJ roiled by Clinton probe disputes. The FBI’s Clinton Foundation Probe. Althouse wonders Will the Weiner email cache revive the investigation of the Clinton Foundation?

Most of the chatter continued to center on Comey's decision to inform Congress at this point.


PREDICTION: “Comey broke precedent about announcing a criminal investigation near an election because he saw something disqualifying.” If so, Hillary may regret the demand that he release everything ASAP . . . .

Meanwhile, as to the timing, note this: FBI agents knew of Clinton-related emails weeks before director was briefed. Does this mean that the agents were afraid to tell him for fear of Loretta Lynch-style interference, like last time?

"But what I'm hearing from everybody... The F.B.I. is in full revolt right now. The F.B.I. has been in full revolt since the decisions made last summer.". Resignation letters piling up from disaffected FBI agents, his wife urging him to admit he was wrong: Why Director Comey jumped at the chance to reopen Hillary investigation. Surprisingly Andrew McCarthy is not a fan of Comey's letter.  Unaplogetic known liar Harry Reid says Comey ‘may have broken the law’ by disclosing new Clinton-related emails. HOWARD FINEMAN ON JAMES COMEY: His carefully maintained nonpolitical image is now starting to fray. "So we're not worried about de-legitimatizing the foundational systems of our democracy any more, I guess."

"Conan! What is best in life?" "To crush your enemies -- See them driven before you, and to hear the lamentation of their women!"

Giuliani thinks it's 'Outrageous' that FBI didn't discover emails sooner. I agree. That laptop should have been taken into evidence before the Weiner scandal broke. Clinton Campaign Asks Ex-Prosecutors to Criticize FBI Director James Comey. A screening system for appointments in a Clinton administration. “Aka job application,” John Podhoretz tweets. “You don’t sign, no US attorneyship for you.” And as expected Former Attorney General Holder and Other Former DOJ Officials Pen Letter Criticizing Comey. Clinton campaign wages new war against James Comey.  Democrats are responsible for politicizing FBI and DOJ.


INDEED: “Observe the behavior of Democrats towards Comey this weekend, and never again presume to lecture me on lockstep partisanship of the GOP.”
Related (from David Sirota!) “Comey may or may not be screwing up. But Eric Holder is an unconvincing voice on how law enforcement should act.” Also true! But hey, they’ve got Jamie Gorelick, too, so . . . .

The military and intelligence people who endorsed Clinton should be apologizing to the country for their poor judgment right about now.
— John Hayward (@Doc_0) October 31, 2016

Four Ways Forward For Clinton After The FBI News She's gone with #1 and #2, with #4 pending,


Strategy No. 1: Demand more details from Comey
Strategy No. 2: Rile up Democratic partisans by attacking Comey and other targets
Strategy No. 3: Let it go
Strategy No. 4: Drop an opposition research bomb on Trump

Nothing is funnier than the press reacting to an October Surprise that didn't come from them.
— David Burge (@iowahawkblog) October 30, 2016

The instant impact of the revelations? Is FBI’s Clinton probe is the black swan that could throw election off course?  Stacy McCain: SHOCKING: TRUMP SURGES IN POLL; HILLARY DOOMED BY F.B.I. PROBE?  REALCLEARPOLITICS: Trump’s average in the four-way race now the highest it’s been all year.  Dick Morris: Trump Took Lead Before FBI Announcement. Grain of salt taken. Pokitiko reports Comey’s bombshell changes few votes, but then how many do you need to change? Ann Althouse looks at the tracking polls, today vs. yesterday. Click to enlarge.

That's a big drop, but not enough, if the polls are right. Are the polls right this year? I have my doubts, they show more variation between polls than usual, and more variation in time than seems reasonable. Do you know anybody who has changed their mind lately? 45% say emails worse than Watergate, 61% fear probe to drag into White House, 34 percent 'less likely' to vote for Clinton after new email revelations. Hillary continues to scrounge for every possible vote including alcoholic atheists and agnostics: IT’S COME TO THIS=> Hillary Clinton Campaigns at Bar, In Florida, Mid Morning, On Sunday…


UPDATE: From the comments: “So, did anybody in the MSM bother to ask Hillary if she will accept the results of the election if she loses?”

Will Hillary stand by her woman? NYT: A Scandal Too Far? Huma Abedin, Hillary Clinton, and a Test of Loyalty. Trump: 'I wonder, is she going to keep Huma?'

John Fund: If Hillary wins, we’ll have a potential blackmail target in the White House. Not a big surprise since even a Clinton ally says Bill, Hillary sometimes have 'the worst judgement' in Wikileaks email. Why Hillary Can't Govern. Insty, writing for USA Today: A President Clinton would be out of control Chris Matthews seems to agree:


“I’ll make a judgment. Every time I watch a politician engage in a certain pattern of behavior before they go to the White House, they continue to engage in that pattern afterwards. People don’t change because we swear them into the White House.”

A Lesson in Cognitive Dissonance 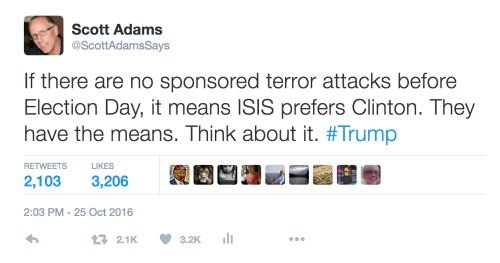 Get it? And speaking of Wikileaks. How about that Donna Brazile? New Email Shows Donna Brazile Also Gave Clinton Questions Before CNN Presidential Debate


“Her family has lead poison and she will ask what, if anything, will Hillary do as president to help the ppl of Flint,” Brazile said in the body of the email. Sure enough, one of the questions directed to Clinton during the debate was from a woman who spoke about the Flint water crisis’ effect on her family, asking what Clinton would do in her first hundred days in office.

This was too much even for CNN: CNN severs ties with Donna Brazile. Now they'll have to depend on George Suffinenvelopes. Trump to Media: Ask Hillary Why She Didn't "Turn In" Donna Brazile. Yep, she went along with it. Heh indeed.

Remember when Marco Rubio drank some water while giving the Republican response to the president’s 2013 State of the Union address? Do these people have any decency? Gawker’s Feminist Blog Jezebel Mocks Death of Mike Pence’s Dog

AT PROMINENT DEMOCRATIC LAW FIRM, “Bonuses” Are Linked To Donations. Remember, Dinesh D'souza went to jail for paying for a relative to make a campaign donation. Will the DOJ care this time.

Leaked Email Reveals Google Chairman Wanted To Be Clinton Campaign’s ‘Head Outside Advisor’ Clearly the era of "do no evil" is over. 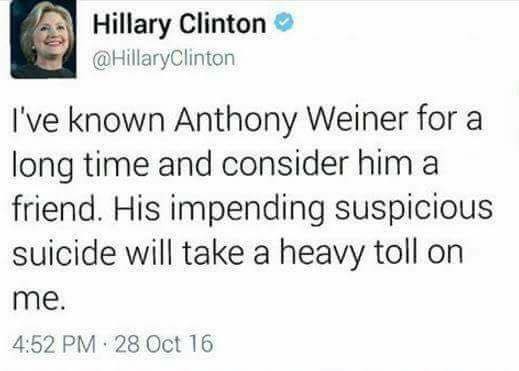