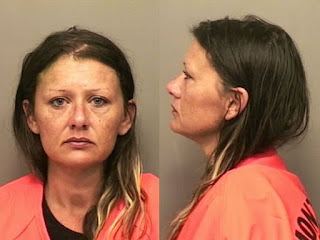 Proving that Florida does not have a complete monopoly on weirdness, in a pre-Halloween warm up, Partially-nude female clown charged with chasing cars in Tennessee.


A woman was arrested Thursday after numerous witnesses called 911 to report that a partially nude woman wearing clown makeup was chasing cars and jumping in and out of traffic on a country road in Cunningham.


According to an arrest warrant, the Montgomery County Sheriff's Office was dispatched to the scene after "a series of calls about a white female wearing clown-like makeup, a stocking cap, and was either partially or completely nude that was running up and down Louise Road, chasing cars and jumping out in front of other cars."

While a deputy was on the way to the scene, 911 received four calls from Kreidel "in which call takers were berated, threatened and cursed," the warrant states.

When the deputy went to Kreidel's home on Louise Road, he found her in a sports bra, pajama-style bottoms, a stocking cap and wearing clown makeup on her face and body. She was also holding a beer.


When asked why she called 911 and berated dispatchers, she said it was because "they need to do their jobs."

Kreidel was determined to be intoxicated and a danger to herself and others and booked into the Montgomery County Jail on $1,500 bond.

I'm looking forward to the trial.

Wombat-socho has "Late Night With Rule 5 Sunday" and up at The Other McCain.
Posted by Fritz at 6:47 PM