On Wednesday, the Republican governor called on Kamenetz, a Democrat, to come up with $650,000 for a spraying program to combat the persistent midge nuisance on the Back River in the eastern part of the county.

Hogan, speaking during a meeting of the Board of Public Works, said his administration offered last week to pay half the cost of spraying the gnat-like insects this year and next if the county matches that sum. 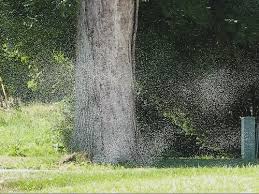 He said the state has yet to receive a response from the county, and at one point urged state Sen. Johnny Ray Salling, a Baltimore County Republican who attended the meeting, to push Kamenetz to act.
. . .
Hogan raised the midge matter as the board voted to approve about $9 million in loans to Baltimore and Baltimore County for improvements intended to reduce pollution from the Back River Wastewater Treatment Plant.

Sewage overflows from the plant are believed to contribute to the conditions that make the Back River an ideal breeding ground for midges.

The area is a Hogan stronghold.

Midges don't bite people, but they can make life miserable by swarming and flying into ears, noses and other places where they aren't welcome. They are regarded as more of a nuisance than a health threat, but have drawn complaints from residents, marinas and restaurants in the Back River area.

The spraying program is intended as more of a short-term solution to the midge menace. If the county comes up with its half, there would be two sprayings at a cost of $105,000 this year and a full series of sprayings costing $1.2 million next year.

Back River is notorious as the long-time sewage receptacle for Baltimore City. Baltimore should be playing for the plague of insects they're visiting on the residents of the Back River area.
Posted by Fritz at 7:39 PM