Say what you want about Donald Trump, but he is a fast learner. Each encounter goes better and better. He brought a lot of attack issues to the table, and wielded them with a modicum of skill. Will it be fast enough to get the job done? As Patterico notes in  Trump Wins Debate:

Knowing the major issue he faced, he began this week's campaign with some heavy artillery to soften the opposition. Women in “Bill Clinton Rape” T-Shirts March in St. Louis Before Wash U Debate. He Told Reporters They Were Going to Pre-Debate Presser, Walked in on Clinton Rape Victims! a room with Kathleen Wiley, Paula Jones, Juanita Broadderick and Kathy Shelton. He also invited them to the debate, doing to Mrs. Clinton much the same as she had done with Mr. Kahn, but with much more impact on the victims. After Anderson Cooper opened the door by asking "the tape question", Donald quickly apologized and when when pressed said he had never actually "grabbed" a pussy.


“Have you ever done those things?” asked Cooper.

If you actually look at the transcript of the tape, he never said he did, he said he could:


"I can kiss any woman I like. It's incredible. You can do whatever you want when you're star. You can even grab their pussy." 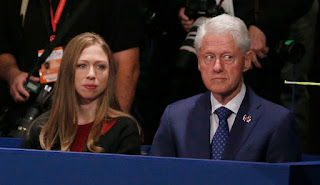 Donald's Great Escape: Trump keeps his campaign alive with barnstorming comeback after confronting Hillary with four Clinton 'sex victims' - and she FAILS to nail him over sleazy tape scandal. Having blasted open the door, Donald went on the offensive pointing out that Bill's offenses were actions rather than words, and that Hillary willing helped to cover it all up, and attacked the women involved. Having the women in the room was important, I think, because it would have put Hillary in the position of having to call them liars to their face. Instead, she settled for a generic attack on Trump as unfit. Bill's reaction was priceless.

About the "moderation" of the debate. How the moderators hijacked the second debate. After being rebuked several times by Cooper and Raditz for going past his time limit, Donald made point of interrupting "over time" answers by the Hillary to ask the moderators to intervene. At one point, he even baited Martha into answering for Hillary. Donald made a comment about having to debate 3:1, which seemed to set the "moderators" back on their heels a bit. One of the big hits of the night was his reply to Hillary's denial of any problems with her email which brought a big round of applause from the audience:


TRUMP: "Bernie Sanders and between super delegates and Debra Wassermann Schultz and I was surprised to see him sign on with the devil. The thing that you should be apologizing for are the 33,000 e-mails that you deleted and you acid washed and the two boxes of e-mails and other things last week that were taken from an office are are now missing. I didn't knowledge I would say this, but I'm going to and I hate to say it. If I win, I am going to instruct my attorney general to get a special prosecutor to look into your situation. There has never been so many lies, so much exception. There has never been anything like it. We will have a special prosecutor. I go out and speak and the people of this country are furious. The long time workers at the FBI are furious. There has never been anything like this with e-mails. You get a subpoena and after getting the subpoena you delete 33,000 e-mails and acid watch them or bleach them. An expensive process. We will get a special prosecutor and look into it. You know what, people have been -- their lives have been destroyed for doing 1/5 of what you have done. You should be a shamed."

COOPER: "Secretary Clinton, I will let you respond."

CLINTON: "Everything he said is absolutely false. It would be impossible to be fact checking Donald all the time. I would never get to talk and make lives better for people. Once again, go to Hillary clinton.com. You can fact check trump in realtime. Last time at the first debate we had millions of people fact checking and we will have millions more fact checking. It's just awfully good that someone with the temperament of Donald Trump is not in charge of the law in our country."

TRUMP: "Because you would be in jail."

COOPER: "We want to remind the audience to please not talk out loud. Do not applaud. You are wasting time."

Clinton campaign response to Donald: Go fuck yourself! That was mighty grown up. 13 Extremely Vulgar Comments That Came Out of the Mouth of Hillary Clinton.


Mrs. Clinton, in the second presidential debate, had blasted the 2010 Citizens United court decision that opened the door to groups spending unlimited money to get a message out in elections, and said she would appoint Supreme Court justices who would overturn that ruling.

Mr. Trump countered that Mrs. Clinton is more beholden to those big-money interests than he is, saying he’s going to spend upwards of $100 million of his own money on his campaign. He challenged her to pony up as much as $30 million of the $250 million she and her husband have earned since they left the White House in 2001.

“Why aren’t you putting some money in?” he demanded.

Mrs. Clinton did not respond to the challenge.

New Email Leak Reveals Clinton Campaign’s Cozy Press Relationship Maggie Haberman at Politico and now the New York Times is their "go to girl" for releasing news the way they want it spun. "We Can Do The Most Shaping” By Going To This Reporter"

Is Donald Trump a problem of Hillary's own creation?

The @HillaryClinton team wrote about their goal of "elevating" Trump 2 months before he declared his candidacy. https://t.co/OaUjtFkKWg pic.twitter.com/FcjPX3NEyv
— Ben Spielberg (@BenSpielberg) October 8, 2016

But I thought there were no classified material in her email? Catherine Herridge has New Allegations of Evidence Tampering in Clinton Email Investigation


Herridge said on "On The Record With Brit Hume" tonight that a close reading of the FBI's files from the investigation reveals that senior State Department official Patrick Kennedy allegedly tried to change the classified codes on some Clinton emails, in order to shield them from Congress and the public.

She explained that an unnamed State Department witness claims there was a deliberate effort to change the "B-1" code on several of Clinton's sensitive emails to "B-5," which would essentially put them down the "ultimate black hole."

Major Clinton Donor’s Company Is Named “Biggest Corporate Tax Avoider” … Look Who It Is. It's Apple, of course, but it could be anybody. No one is under the obligation to pay more taxes than they have to, despite Hillary's continual caterwauling to the contrary. Americans for Tax Reform helpfully provides this list of List of 10 Hillary Tax Hikes.

Recently it was bandied about that Donald Trumps Foundation was "operating illegally" in New York, because they had failed to re-register the charity there. But the Clinton Foundation was late to file paperwork, but got pass from AG. Equal "just ice" for all under democrats.

Huma Abedin in hot water for dismissing AIPAC as ‘that crowd’
Posted by Fritz at 10:02 AM