Some Sunday Morning at Clinton.com

The State Department released a slew of Clinton emails on Friday obtained by the FBI as part of their investigation into Hillary Clinton’s use of a private server whilst secretary of state.

The new release includes one email that, while it did not contain classified information at the time at which it was sent, did contain information that the State Department has now decided should be classified. The email had been deleted by Clinton from her private server.

“I chose not to keep my private personal emails.”

“Today, the State Department is making publicly available online 112 documents totaling 247 additional pages of emails sent or received by Secretary Clinton in her official capacity during her tenure as Secretary of State,” State Department Spokesperson John Kirby said in an official statement.

The newly-classified email serves to underscore the extent to which Clinton’s initial claims that her deleted emails related only to personal matters were completely and utterly false.

As Mark Steyn writes Laws are for the Little People

More from Wikileaks, Clinton-Kaine Even Lied About Timing of Veep Pick. They even lie about the inconsequential stuff, just to stay in practice. Speaking of Wikileaks, and the Democratic claim that they are Russian psyops, some alternative explanations. A retired UK Ambassador familiar with Assange claims that it is not the Russians, and, in fact, not the result of a hack at all (which implies as source within the US government). Silence is Consent suspects NSA is responsible. Meanwhile cybersecurity expert John McAfee thinks 'Iran hacked the DNC, and North Korea hacked DYN':


Why Iran? "The Iranians view Trump as a destabilizing force within America," said McAfee. "They would like nothing more than to have Trump as President."

"If all evidence points to the Russians, then, with 100% certainty, it is not the Russians," said McAfee. "Anyone who is capable of carrying out a hack of such sophistication is also capable, with far less effort than that involved in the hack, of hiding their tracks or making it appear that the hack came from some other quarter. The forensic tools used to assign culpability in a hack are well known, in the cybersecurity world, to be largely ineffective. They may, sometimes, correctly identify an unsophisticated 15 year old as the source of a hack, such as the teenager who hacked the FBI less than a year ago. But they are completely ineffective against large, sophisticated groups of hackers such as those run by the Russian State."

Speaking of the Russians, The Kremlin is reporting a $1.8 billion transfer having just been made from the Clinton Foundation to the Qatar Central Bank. I’m sure for charity. Right? Poverty is rampant in Qatar, I'm sure.


An intriguing Ministry of Finance (MoF) report circulating in the Kremlin today says that elite Western bankers were “stunned/bewildered” a few hours ago after the Bank For International Settlements (BIS) registered a $1.8 billion transfer from the Clinton Foundation (CF) to the Qatar Central Bank (QCB) through the “facilitation/abetment” of JP Morgan Chase &Company (JPM)—and for reasons yet to be firmly established. [Note: Some words and/or phrases appearing in quotes in this report are English language approximations of Russian words/phrases having no exact counterpart.]

Hillary’s secrets might haunt her if she becomes president. Indeed. She's not very popular, and unlikely to become more so.


The second presidential debate made that assessment even clearer when, in an exchange on Syria, Clinton denied being secretary of state when President Obama drew his red line against Syrian use of chemical weapons against civilians. Clinton's continued obfuscation, deception and shading of the truth went beyond the pale. "I was gone," she claimed. No, Madam Secretary, you were not gone. You were responsible for our government's foreign relations during that time.

Let's briefly review her qualifications to be commander in chief and focus on key international decisions considered to be, by her supporters, a strength. Clinton's policy decisions have affected thousands: decisions that resulted in the loss of our soldiers, sailors, airmen and Marines; decisions that have cost this country trillions of dollars; decisions that have destabilized the Middle East and decisions that demonstrate her decision-making quality (a quality that is sadly lacking).

Unlike Donald Trump, Hillary Clinton was a sitting United States senator who voted for the war in Iraq. By that vote in 2003, she bears some responsibility for our involvement. Later, when the war was at a tipping point in 2007 and General David Petraeus advocated for a surge of U.S. forces to regain lost momentum, she voted against it.

As secretary of state she failed to negotiate a residual force that would have prevented Prime Minister Nouri al-Maliki from creating sectarian strife. The ensuing strife led to the creation of an irregular war between Sunni and Shia with the Islamic State growing from that turmoil.

Each decision point was a critical event in U.S.-Iraq relations, and each a significant failure. Each have Clinton's fingerprints on them. The latter two clearly demonstrate arrogance and a a disdain for military recommendations.

Soros group is accused of violating Arizona election law Can we add Arizona to his list of felony convictions. Can James O'Keefe make good on this promise? James O’Keefe Tells Trump Not to File Lawsuit Just Yet, Hillary Was “Personally Involved” in Dem. Violence.

Goldman CEO Blankfein ‘Supportive’ of Clinton for Pragmatism. I think that was a foregone conclusion when he paid her millions for speeches. Which helps Trumps argument Trump closing argument is battle cry against Clinton corruption Best comment from:  "If [Trump] gets in, good luck to him. That's what the people wanted...."


Oh, knock it off. If it were up to me to choose the next US President, I would probably not choose Donald Trump. But the idea that a Trump Presidency would be disastrous is just silly. Trump might embarrass us from time to time, but it is hard to see how he could top Bill Clinton fucking an intern in the Oval Office with a cigar. Probably a Cuban cigar. Maybe Trump will grab Angela Merkel by the merkin? She'll get over it. Tell her he's a Muslim, she'll thank him and ask for another. Trump will likely choose a very diverse group of advisors and officials, and have a contentious relationship with the House and Senate. His foreign policy will be the despair of career diplomats. So what? You mean we won't get a two-state solution during his administration? Tsk fucking tsk.

Hillary Clinton is a Hard Left ideologue. She will staff federal agencies with her Left Fascist cronies. She will flood the country with Muslim immigrants, many of whom will prove to be terrorists, and very few of whom will prove to be productive citizens. She will send federal officers to disarm the populace, and they will get their asses shot off in the process of killing a lot of law-abiding people, and imprisoning a whole lot more. Think Gulags. She will follow the Invade-The-World, Invite-The-World approach to foreign policy, which means getting American soldiers killed in filthy hellholes, while importing the people who turned them into hellholes into our communities.

Trump will be an episode in the decline of nation that has seen better days. Clinton will be the governmental equivalent of Ebola. The idea that this is a difficult choice is flatly ridiculous. I can see that there are many people who expect to benefit substantially and directly from Clinton's election. Those people are parasites on the rest of us, and have neither patriotism nor enlightened self-interest. They are exactly the kind of people who will burn down a department store so they can steal a pair of shoes. There may well be enough of them to elect her. But if you aren't one of them, quitcher bitchin, vote for Trump, and get on with your affairs.

Hillary Clinton's Insidious Threat to Traditional Christianity They must fundamentally change to fit her ideas.


Last April, Clinton infamously declared that "deep-seated cultural codes, religious beliefs, and structural biases have to be changed" in order to make way for abortion and other forms of "reproductive health care." These remarks, given at the sixth annual Women in the World Summit, are fully in keeping not only with other denigrating speeches she has given about religious beliefs, but even with her colleagues' political work behind the scenes, as recently revealed by WikiLeaks. 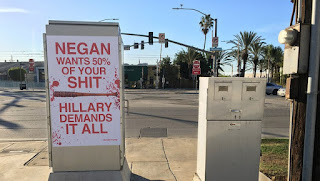 More Proof – NY Times Accuser Made Her Story Up About Trump’s “Groping”. Growing inconsistencies in her story.

Hillary Clinton’s eye problems return at Cleveland rally I don't see much, myself.

“Bill Clinton Is a Rapist!” Protester Interrupts Bill at Small FL Rally. His title can be "First Rapist."