Malheur Seven Acquitted on All Charges 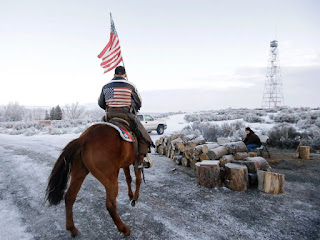 A federal jury on Thursday found Ammon Bundy, his brother Ryan Bundy and five co-defendants not guilty of conspiring to prevent federal employees from doing their jobs through intimidation, threat or force during the 41-day occupation of the Malheur National Wildlife Refuge.

The Bundy brothers and occupiers Jeff Banta and David Fry also were found not guilty of having guns in a federal facility. Kenneth Medenbach was found not guilty of stealing government property, and a hung jury was declared on Ryan Bundy's charge of theft of FBI surveillance cameras.
. . .
The jury of nine women and three men returned the verdicts after five hours of deliberations on Thursday in the high-profile case that riveted the state and drew national and international attention to the federal bird sanctuary in rural eastern Oregon.

Each defendant stood separately, facing the jury, as the judge read the verdicts. Ammon Bundy, his hands clasped behind his back, nodded as the "not guilty'' verdicts were read for him first. As he sat, he smiled and rubbed the shoulder of his lawyer, Marcus Mumford. 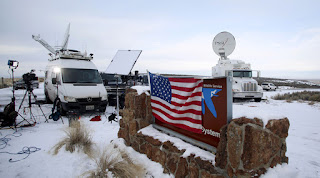 The acquittals did not occur without incident:


The coda to the stunning verdict, undoubtedly a significant blow to federal prosecutors, was when Ammon Bundy's lawyer Marcus Mumford argued that his client, dressed in a gray suit and white dress shirt, should be allowed to walk out of the court, a free man.

U.S. District Judge Anna J. Brown told him that there was a U.S. Marshal's hold on him from a pending federal indictment in Nevada.

"If there's a detainer, show me,'' Mumford stood, arguing before the judge.

Suddenly, a group of about six U.S. Marshals surrounded Mumford at his defense table. The judge directed them to move back but moments later, the marshals grabbed on to him.

"What are you doing?'' Mumford yelled, as he struggled and was taken down to the floor.

As deputy marshals yelled, "Stop resisting,'' the judge demanded, "Everybody out of the courtroom now!''

Mumford was taken into custody, a member of his legal team confirmed. 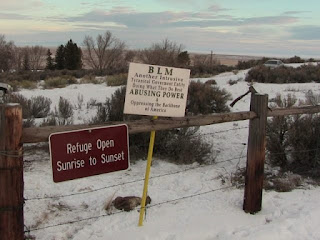 Unless there's much more to the story of Mumford's protestations than is reported here, the marshal's reactions seem extreme and punitive, as if to take revenge on the person who managed to help the seven evade what they perceived as justice. Mumford said later that he was tased in the incident.


By 6:30 p.m., Mumford was released from custody. He confirmed that he was struck with a stun gun once while he was on the floor of the courtroom.

"I grew up on a dairy farm, so am I used to some rough treatment, sure?'' he said. But he said the actions of the U.S. marshals were uncalled for.

"All I was asking for was papers. Just show me you have the authority to take Mr. Bundy into custody.'' 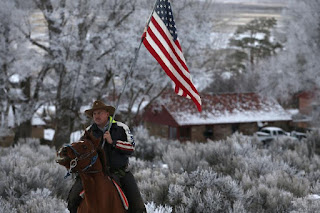 Pretty clearly a case of jury nullification, but I'm OK with that. The jurors may have found the hook they needed to acquit:


Schindler said he believes the jury's verdicts resulted from the difficulty the government had in proving that the "intent'' of the defendants was to conspire against the U.S. Fish and Wildlife Service and U.S. Bureau of Land Management.

"The judge gave us broad ability to bring in a defendant's state of mind and what you saw was a number of defendants who each had their own motivations,'' Schindler said.

When prosecuting a drug conspiracy, it's easy to point to what the defendants' underlying objective is. But in this case, Schindler said, there was "no obvious underlying self interest.'' He said the defense also was bolstered because the jurors came from different regions from the state, and not just from Portland. 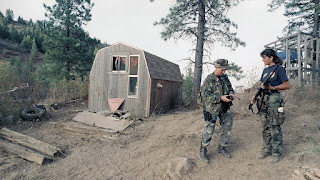 Another factor may have been the FBI's heavy handed use of FBI "infiltrators" in the standoff. As many as 15 FBI plants also participated in the crimes alleged by the government: Defense rests with witness confirming he was FBI informant and ran occupation's shooting range


Defense lawyers rested in the Oregon standoff case Monday after they called a witness who confirmed he was an informant for the FBI and acknowledged that he infiltrated the occupation of the Malheur National Wildlife Refuge and supervised the shooting range for several days.

The man who occupiers initially knew only by his alias "John Killman'' was revealed to be Fabio Minoggio, a Las Vegas resident subpoenaed by the defense to testify after prosecutors declined to confirm if he was a government informant.
. . .
Minoggio was one of 15 confidential informants who fed the FBI information about the occupiers, testimony showed.

Nine of the 15 were at the refuge for various lengths of time between Jan. 4 and Jan. 26, according to a statement that Assistant U.S. Attorney Craig Gabriel read to jurors. Those nine included the three who have been identified at trial: Minoggio, defense witness Terri Linnell of California and Mark McConnell, who was the driver of the Jeep that Ammon Bundy was riding in when he was arrested on Jan. 26.

None of the unidentified other six informants were at the refuge beyond Jan. 23, Gabriel told jurors.

While it is perfectly legal to use such plants, it may not have sat well with jurors that there were more people from the FBI participating in the stand off than people who were actually charged with crimes. That screams entrapment.

It will be interesting to see how the Nevada trials go. After this, I'm sure the government will be sure to push for an all urban jury, if possible. The jury in this trial, which was held in Salem, had jurors from a wide area of Oregon, not just the cities of Salem and Portland, which might have had an entirely different outcome.