Whew: Wikileaks keeps the pressure on, releasing another 1,100 John Podest emails. This is what happens when you threaten to drone someone who buy bytes by the barrel: Clinton camp appeared to have contacts with DOJ on email case. We also see that the State Dept Coordinated Email Release With Clinton Campaign No corruption there. I'm sure they'd do that with any criminal suspect. And yet the White House denied any interference. Donald Trump was not convinced: ‘Unbelievable’ Level of Collusion between Clinton and DOJ on Email Investigation'. Neither am I.

The latest email leak also gives unprecedented insight into the degree of collusion between the media and the Clinton campaign. NYT/CNBC’s John Harwood Advises Clinton Campaign, Gloats About Provoking Trump At Debate. Another one reveals Clinton Campaign Boasting About Media: ‘Every Single Interviewer Was for Her' and another one that Univision chief urged Clinton camp to hit Trump, hacked emails show. CNN Jake Tapper congratulated Podesta on White House appointment. Nothing wrong with that I suppose. But the Boston Globe Coordinated How To Maximize Hillary’s ‘Presence’. We also find that Hillary Clinton Speeches Include Cues on When to ‘Smile’ One would think a few simple "if, then" statements in her programming would be sufficient. Supporting the "dense pack" theory of Clinton scandals one email shows Clinton campaign used Benghazi as distraction from email scandal. All the news that fits the narrative: New York Times Gave Hillary Veto Power. Leaked Emails Reveal Hillary Clinton Hates The Phrase ‘Everyday Americans’ She doesn't know what they are anymore. Donna Brazile Shared CNN Town Hall Questions With Clinton Camp. Have you ever noticed how packed with old Democratic hacks the media are? WikiLeaks, Clinton campaign in Twitter war over latest leaks. I'm sure that'll help. Starbucks chief Howard Schultz warned Clinton campaign her 'stale' approach couldn't reach millennials. On a lighter note, the emails also reveal that John Podesta Probably Broke Up Blink-182 Over UFOs.

But even without Wikileaks, you can still catch the media up to it's usual games: Associated Press Botches Trump Debate Fact Check on Assad and the Islamic State, Then Botches It Again, NBC, ABC Interrogate Clinton Accuser: Aren’t You Just a Trump ‘Prop’? Maybe, but since you're just a Clinton prop it's all fair. CNBC Alters Transcript of John Harwood Question About Hillary's Email, sure why not? CNN Caught in the Act of manipulating polls. NBC Planned to Edit Billy Bush Out of the “Grab Them by the P***y” Tape”. Got to protect the insiders. Until they're not useful anymore. Billy Bush’s Departure From ‘Today’ Is Imminent: ‘He’s Definitely Gone’ 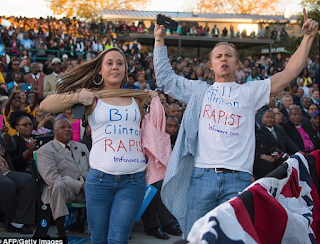 Meanwhile Bill Clinton ‘Rape’ Protesters Disrupt Obama At Campaign Event For Hillary. Asking the million vote question Why Is Trump’s Sexual Depravity Bad But Bill Clinton’s Okay? Because, shut up! From Beyonce and Jay-Z to Chance the Rapper and Pusha T: Meet Hillary's rap-star supporters behind vile lyrics some say are way WORSE than anything Trump ever said. Joy Behar calls women (who claim molestation by Bill Clinton) to be Tramps. Why her apology isn't enough. Millennial women expect better than Clinton. They expect a lot of things they are never going to get. Banished! Bill Clinton's Bastard Speaks Out, Asks for DNA Test.

“I read he doesn’t have long to live and I want to meet him face to face before he dies,” Danney told Newsmax. “I just want to shake his hand and say ‘Hi, Dad,’ before he dies.”

After the hurricane winds and the flood come the plagues. Haitinans Fear Clintons Will Scam Them Again. Never let a good crisis go to waste. Report: Clinton Foundation donors got rich off Haiti relief efforts while Haitians live in squalor

From a regular FOIA “Is this a FOB”: State Department prioritized Clinton cronies for access, Nope, no corruption there. The Washington Post finds One of Clinton’s biggest critics in email case who says he’d tell Trump not to jail her. The pointless hysterics over Trump “throwing Hillary Clinton in jail” Either we have laws that bind everybody, or we don't.

New Trump ad highlights fainting Clinton: She doesn’t have the “fortitude, strength, or stamina” to lead against terrorism. He's baaaack! Mystery ‘medical’ aide back by Hillary’s side after long absence