It Was a Dark and Stormy Night at Clinton.com

The second debate that is. How can you tell that Hillary lost the debate? The media complaining about the 'dark' tone. At the Washington Post A dark debate: Trump and Clinton spend 90 minutes on the attack. Mother Jones, In Second Debate, Donald Trump Showcases His Dark Soul. Pennlive: A nasty, dark second debate did Trump no favors - but it didn't kill him either. Mashable: Ken Bone was the light in the dark second presidential debate tunnel. MSNBC even anticipated the trend (they got the memo early): Trump sounds dark note ahead of debate. New Zealand got the memo late (must be that dateline thingy): 'Dark, bitter and vicious' - the verdict on second debate. How many days before the event occurred did the 'journolosts' invent the 'dark tone' theme? Chris Cilliza at the Washington Post apparently missed the memo, and resorted to complaining that Trump called her by appropriate pronouns: The Hapless and Ovoid Chris Cillizza Now Complains That Trump Referred to Hillary By Her (Allegedly) Gender-Appropriate Pronouns, WaPo‘s Chris Cillizza Complains That Trump Kept Calling Clinton ‘She’ and ‘Her’. HotAir speculates: There’s probably not going to be a third debate, right?. Will she try to run out the clock?

Further "fact checking" of the debate: Clinton Shows How She Manages to Be Less Trusted Than Trump, Yes, Bill Clinton Was Disbarred and Fined After Impeachment, Yes, Trump Did Tell His Followers to ‘Check Out’ a ‘Sex Tape’ as a way to look into Alicia Machado's sketchy past. Without interruptions, Clinton manages to contradict herself on coal jobs at debate. Martha Raddatz Receives Huge Backlash For Biased Debate Moderation. The fact-checkers keep destroying fact-checking. Bill O'Reilly Claims At Least 3 Media Orgs Have 'Ordered Employees to Destroy Trump'. Only three? 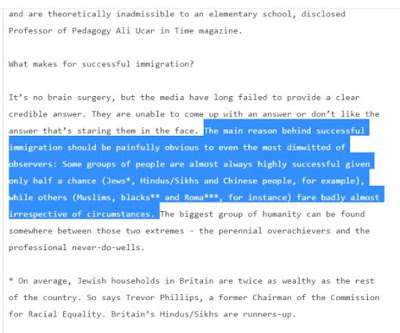 
Former President Bill Clinton’s chief adviser at the time, Doug Band, sent an email to the former president’s staff involved with the Clinton Foundation that he talked the nonprofit’s COO, Laura Graham, out of ending her life.

“Late last night, laura graham called me as she couldn’t reach my brother or her shrink,” Band wrote in a Dec. 2011 email chain discussing the Clinton Foundation’s “infrastructure.”

“She was on staten island in her car parked a few feet from the waters edge with her foot on the gas pedal and the car in park,” he wrote. “She called me to tell me the stress of all of this office crap with wjc and cvc as well as that of her family had driven her to the edge and she couldn’t take it anymore.”

Hillary In Leaked Email: Saudi Arabia And Qatar Are Funding ISIS. Curiously, both Saudi Arabia and Qatar are also big donors to the Clinton Foundation. Coincidence? 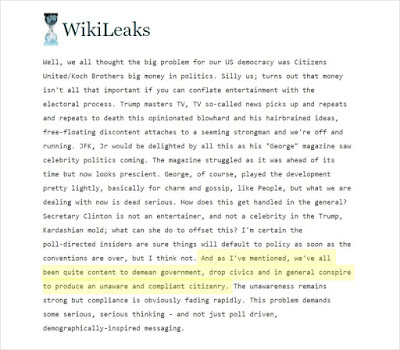 Clinton Campaign Email Outlines Effort "To Produce and Unaware and Compliant Citizenry"  To be fair, they started with the process well underway.

Nothing got more press than Trump's offhand statement that he'd appoint a special prosecutor, and Hillary would go to jail. His campaign manager called it "a quip".  Hysterics ensued: CNN compares Trump to Putin, Mugabe for ‘You’d be in jail’ remark, ABC Trump's 'You'd Be in Jail' Debate Jab at Clinton Condemned New York Times:


But it’s not Mr. Trump’s open contempt for the norms of liberal democracy that made my blood run cold. It was the applause that came after. It is the fact that it’s no longer assured that you automatically lose a presidential debate in which you promise to jail your political rival.

But at reason: Trump’s Call for Clinton’s Prosecution Is Only Deemed ‘Outrageous’ Because of the Target and remember 16 Times Democrats Tried To Prosecute Their Opponents


Make Clinton’s life hell for the next month.


"You know," Clinton said after the demonstrator was forcibly removed from her campaign event, "I do hope somebody follows that gentleman out and stages an intervention."

The demonstrator, an African-American man, was wearing a shirt featuring a likeness of Bill Clinton with the word "RAPE" printed across the front.

Only One Way for the FBI to Regain Its Lost Reputation


There is only one thing, at this point, that can rehabilitate the reputation of a once honorable organization now up to its neck in the muck of influenced investigations and tampered justice.  A number of current FBI agents must publicly condemn Director Comey and deplore the deeply disturbing, very unusual actions taken by the FBI in these investigations.  This may cost the agents involved their careers, but agents who care about the agency more than their careers will take that risk.  These agents ought to explain exactly how this investigation was utterly wrong and how it deviated from normal practices.

Not even close to convincing for me: Glenn Beck: I’ve considered voting for Hillary Clinton

More reports of Hillary's behind the scene potty mouth: Hillary and the art of the dirty mouth and If you think Donald Trump’s comments are vulgar, check out Hillary’s potty mouth

A whole load of links at Larwyn's Linx: The Return of The Mule; Hapless and Ovoid Chris Cillizza Now Complaining About Debate

From Wombat-socho's "In The Mailbox: 10.10.16", Donald Trump And The Really Terrible, Horribly Horrible Bad Word, Donald Trump To Hillary Clinton – “You’d Be In Jail”, This Photo Of Bill And Chelsea Sums Up The Second Debate Perfectly, The Republican White Togas At Work For The Queen Of Sleaze, Goodbye, Blue Monday – Debate Recap, The Washington Post Is A Communications Arm of The Democrats,  Donald Trump, Play Of The Game – 2nd Debate, Democrats Freak Out Over Trump’s Threat To Prosecute Clinton While Democrat Platform Calls For Prosecuting “Climate Deniers”, Hillary Panics As Wikileaks Drops Another 2,068 John Podesta E-Mails, Adding To The “Won’t Happen” List, Trump Wins, Could McCain Actually Save Trump In Arizona?, Steer Clear Of Mirrors, Ugh! I Hate To Say I Told You So, Leaked E-Mail – Hillary Campaign Worried Bill’s Sexcapades Could Sink Her Campaign, As I Was Saying…
Posted by Fritz at 11:04 AM