IBT Editorial: Comey Lied And The Scandal Died. It hasn't died; it's just in an induced coma. Whether it will recover depends on who wins the election.

IMHO, the biggest leak from Wikileaks, Clinton Sent Intelligence Info To Podesta’s Hacked Email Account. Now we know fur sure that Hillary carelessly leaked intelligence data to the Russians. Oh, and she saw ISIS as an "opportunity":


“With all of its tragic aspects, the advance of ISIL through Iraq gives the U.S. Government an opportunity to change the way it deals with the chaotic security situation in North Africa and the Middle East,” Clinton wrote to Podesta in an August 2014 email obtained by WikiLeaks.

In other leaks, Podesta Asks Clinton's Lawyer, 'Think We Should Hold Emails To and From (Obama)?', meaning hold them from the Benghazi committee. Remember, Podesta was not a government official at this point. We also find out that Podesta found the Iran Deal "disastrous", and that Hillary Clinton was Enraged About Bill Canceling Paid Wall Street Speech in 2015. Hey, Chelsea's shoes aren't cheap. One email notes all the donations from “foreign governments” were “in.” Again, Podesta was Hillary's campaign chair, not an officer of the Foundation. What business does he have with foreign donations? Also, Podesta Linked Up Google’s Executive Chairman and Cheryl Mills, Robby Mook. Google has an amazing ability to influence elections. Will it use it? Will we find out? New Podesta e-mail leak: 2008 Hillary backers discussed attacking Obama’s Muslim father. The Clintons never change. But like crabs, they occasionally shed their shell and get bigger and nastier. About that saying one thing in public and another in private, Hillary Clinton on environmentalists: ‘Get a life’, but continue sending in those donations. A Clinton ally reveals how the left played the Chief on ObamaCare.  Hillary hold secret briefing for media. Google trends shows internet users show more interest in Wikileaks than "Trump pussy", "Trump women" or "Trump allegations." That may well reflect the fact that Wikileaks is being all but boycotted by the MSM. 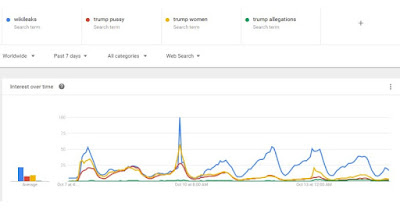 “She’s taking some credit and she’s raising money because of it,” Robert O’Neill said on Fox and Friends on Wednesday. “I don’t want to take away from the part she had, but we didn’t kill Osama bin Laden because of Hillary Clinton.

Clinton Foundation Internal Audit: We May Have Misled the IRS. But I'm sure it was just an accident. Rand Simberg: To Restore Article II The Constitution, Elect Trump Defeat Hillary:


The Executive branch has grown far too great in its power since the Founding, far beyond that envisioned by the Founders. This is because, as discussed above, due to blind partisanship (largely by Democrats), Article II Section 4 of the founding document has been used far too infrequently, and has had much less disciplinary power than they intended. If Hillary Clinton is elected, as we saw with her husband, this situation is certain to continue.

On the other hand, if he exists, a President Trump will have likely come into office with the lowest share of the popular vote since Abraham Lincoln, and will have alienated not only the Democrats (despite the fact that he’s been one for decades), but large segments of his “own” party, and will have minority support within it. And the man who would be his Vice President, Mike Pence, is hugely popular in his own party, and would be seen as a preferable President by most (many of whom currently think the ticket upside down, at best, if Trump should be on it at all).

In other words, a President Trump will be on probation with both parties from the moment he takes the oath of office. He is not a black man, or a woman of any color, so the Republicans won’t have to worry about going after one of the victim classes, other than septuagenarian orange people, a class for whom, when also considering John Boehner, Democrats feel few social-justice pangs. He will operate within the Constitution, or there will be bipartisan desire to stop him, and few on either side of the aisle will have any qualms in doing so.

Regardless of the electoral outcome, we are about to elect one of the worst presidents in American history. But only one choice will offer us a potential opportunity to rectify that situation.

Tale of the Trump Tape: NBC Has A Lot of Explaining to Do. There are three possible explanations for the timing of this week's oppo dump. None look particularly good for the media.

There are multiple and even conflicting fact checking and refutations of some of the women who accused Trump. One British man says Trump accuser is lying about their encounter in first class. Unfortunately, the man has, to say the least, a checkered past as an underage procurer of underage boys for British pols. This is also the same case where someone pointed out that first class seats don;'t have the movable armrests for Trump to move to get at her. Another story suggests that the woman had a gripe with Trump over a land dispute: Does Donald Trump First Class “Groping Accuser” Have a History of Conflict With Trump Property?…. Are the two Jessica Leeds the same person? And BUSTED: @NYTimes Trump Accuser #RachelCrooks Is LYING According To Family Friend. If one case is thoroughly debunked, is it safe to assume they were all bogus?

To try to make this more personal, after she stepped in front of Trump to speak at the debate Hillary claimed "Trump literally stalked me at the debate, you know". Ann Althouse:


Sexist claptrap, in my opinion, but Trump's response, which starts out okay, ends in what I'm seeing as a rape joke:


“So I’m standing at my podium by my chair. She walks across the room. She’s standing in front of me, right next to me,” Trump claimed.“And the next day I said what did the papers say? They said, ‘he invaded her space,’” he said. “Believe me, the last space that I want to invade is her space.”

Which is feminist claptrap. Is Hillary really so weak she fears a man behind her on stage? That doesn't bode well for her ability to negotiate with, say, Vlad Putin. In Her Criticism of Trump, Hillary Forgets Her Own Past as a Slut-Shamer. Aside from strategic memory lapses at testimony, I suspect Hillary forgets nothing, but hopes you do. Believe the victims — unless they're Bill's. Biden: Bill Clinton’s past “shouldn’t matter” in this campaign. Sorry, it goes to Hillary's character as well.


And as Jonah Goldberg adds in his latest G-File, “I honestly can’t get my head around the fact that Hillary Clinton’s closing ‘argument’ in this election is sexual harassment. Bill Clinton’s lifelong enabler has managed to turn this topic into a deadly weapon against a Republican nominee. This is like Godzilla turning public safety into a winning issue in the Tokyo mayoral race.”