Resuming the leftovers from an oversize post this morning. 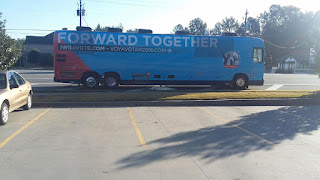 Lawrenceville police are also investigating the claim which surfaced on Tuesday, a photo shown to us by a CBS46 viewer showed a Democratic National Committee tour bus apparently making the dump between campaign stops.

CBS46 viewer Mike Robins, manager of a nearby business, took several photos of the tour bus dumping waste into the storm drain. In the pictures, a liquid can be seen coming from the bottom of the bus.

According to Robins, a hazardous materials crew responded to the location and collected the waste to keep more of it from entering the storm drain.

WaPo's Fact Checker gives Hillary 4 Pinocchios. "Clinton is creating an imaginary Trump here, claiming that Trump didn’t really care about the auto industry." Hillary tell an untruth? Forsooth! Debate Check III: Eight Hillary Lies Debunked ‘Protect Toddlers From Guns’ — Hillary Goes On Nonsensical Gun Control Tear At Debate. No, Hillary, The Supreme Court’s Heller Decision Wasn’t About Toddlers "Hillary Clinton claimed the Heller decision was about toddlers. It was actually about whether a 66-year-old police officer had the right to keep a gun at home." Clinton’s ‘Forceful’ Gun Position Had Some Democratic Caucus Members ‘Freaking Out’, as well as most non-millennial males. Hey Hillary, thanks for telling the world America’s response time for a nuclear launch, but Donald Trump is the scary one? Can Hillary Clinton Bring Us Better Weather? Why not, Barack Obama caused the seas to start falling, amiright?

Between the outright corruption and the well meaning but poorly performing liberal policies, the poor Haitians never had a chance. The rule of law cannot survive with a crook like Hillary Clinton in the White House Hillary sees America as Haiti with herself as Mama Doc.

Michael Moore: "Hillary Killed Vince Foster? That's bad ass, and a good reason to vote for her." Why I can't forgive Hillary Clinton: She failed to grapple with the seriousness of her husband's egregious Oval Office offenses. 2016 Tabloid Simplicity: Public and Private Positions vs Private Parts


She holds public and private positions, which differ, diametrically.

Ace's occasional "quote of the day":

And Hillary proposes to run the government. The Unequally Terrible Election


* One Candidate is an unindicted career political criminal with a verifiable record of political and personal corruption and illicit activity stretching back more than a decade before her ascendance to her first major political position by virtue of marriage of convenience to an even more charismatic and electable political criminal.

The other Candidate is a multi-decades long figure who’s been in the world wide media and public scrutiny for longer than some hostile media figures have been out of diapers about whom the worst that has been dug up and exposed is that he’s filed for bankruptcy a couple of times and that he once said “pussy” in a taped conversation. Oh, and he has tiny, vulgar hands, too. So there.